Canadian property and casualty insurers cannot be the sole financial backstop for homeowners who build their homes in high-risk flood areas, a senior industry executive told a catastrophe risk conference in Ottawa. 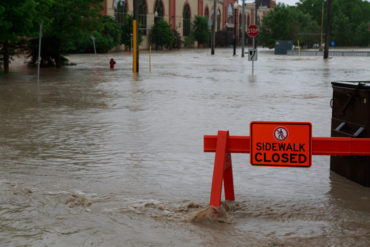 “We have to resolve the issue of high-risk properties, because the insurance industry in the current environment cannot be there to save high-risk properties,” said Alain Thibault, chairman, president and CEO of CADRI. “It has to be a concerted effort by various stakeholders, including government.”

Mississauga Mayor Bonnie Crombie gave a novel illustration of how municipal governments can help homeowners move out of high-risk flood zone areas — buy them out.

“We have taken the very bold step to actually purchase about 50 homes in the flood plain, at market value, for parkland. We needed the parkland in our downtown area.”

But while the strategy may have worked in Mississauga, similar expropriation initiatives have not fared well in other notable Canadian flood zones, as noted in a speech later in the day by Glenn McGillivray, managing director at the Institute for Catastrophic Loss Reduction. The conference was held in Gatineau, Quebec, where word came out that some homes were being built in high-risk flood zones.

Also, after the 2013 flooding in Calgary, which cost P&C insurers $1.9 billion in claims payouts, “we have a failed buyout program in southern Alberta,” McGillivray said. “It was a voluntary program that by all accounts was not a success.”

Typically, insurance policies will avoid a moral “hazard,” by not promising to build homes better than what the home was worth before a catastrophe. Otherwise, homeowners would have no incentive to protect their home against risk. So replacement cost policies limit the chance of getting back a better, more resilient home.

“It’s those limitations we want to think about when we think about catastrophes and building back better [homes].”

First, the home must be built in the same location. But what if that is in a flood plain? “That creates a real incentive to build in a location that isn’t the optimal place to be building,” she said.

And second, an insurer will use materials “of same, like, kind and quality” to rebuild the home. Can that be interpreted to mean an insurer can use materials that will make the home more resilient—hurricane clips to keep the roof on during a hurricane, for example?