Mergers and acquisitions (M&A) of insurance agencies last year were the second-highest ever in 2016 at 449 deals in Canada and the United States, a slight dip from the all-time record of 456 in 2015, according to OPTIS Partners’ annual report. 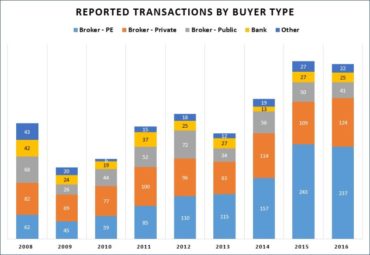 The report was released on Tuesday by the Chicago-based OPTIS, an investment banking and financial consulting firm specializing in the insurance industry. It is focused exclusively on the insurance distribution marketplace and offers M&A representation for buyers and sellers, including due diligence reviews.

“It was a sellers’ market last year, and it will probably remain one in 2017,” said Timothy J. Cunningham, managing director of OPTIS, in a press release. “But the perfect storm benefitting sellers won’t last forever.”

The report covered reported transactions of agencies selling primarily property and casualty insurance, agencies selling both P&C and employee benefits and employee benefits agencies. According to the report, private equity-backed agencies were 2016’s biggest buyers, making 237 purchases, 53% of the total. The top two were Acrisure (63 deals) and Hub International (45 deals), the release pointed out. Privately owned insurance agencies came in second, buying 124 agencies. They were followed by public brokers (41), banks (25) and carriers/other (22).

Looking at sellers, sales of P&C-focused agencies continue to dominate the list, with 54% of all sales, OPTIS reported. Sales of employee benefits agencies rose to become the second most popular category, accounting for 20% of sales, up from 17% in 2015. Deals for both agencies selling both P&C and employee benefits held steady at 17% of transactions. The “other” category was 9%. 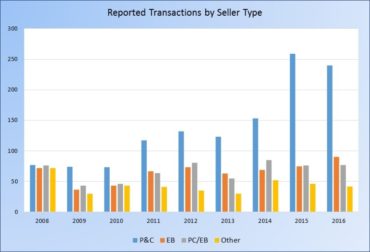 Cunningham noted that the actual number of sales was even greater than the 449 reported, as many buyers and sellers do not report transactions, and some acquirers do not report small transactions. “The OPTIS database tracks a consistent pool of the most active acquirers, including other announced deals, and is, therefore, a reasonably accurate indication of deal activity in the sector,” he said.