Insurance industry ‘has to be ready’ for automated vehicles: Insurance Institute speaker

The rollout of fully autonomous vehicles for consumers “is quite a bit further off than we might expect,” and experts need to educate consumers about the limitations of the technology, but insurance providers should get ready over the next five to 10 years for automated vehicles, speakers suggested Wednesday at a conference in Toronto. 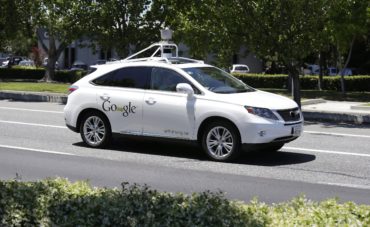 FILE – In this May 13, 2014 file photo, a Google self-driving car goes on a test drive near the Computer History Museum in Mountain View, Calif. Self-driving cars are expected to usher in a new era of mobility, safety and convenience. The problem, say transportation researchers, is that people will use them too much. (AP Photo/Eric Risberg, File)

“The fully robotic household vehicle – one that you can put in a driveway at your home and one that requires no driver and wouldn’t have a steering wheel –  is quite a bit further off than we might expect,” said Bern Grush, co-author of Endofdriving.org, at the CIP Society Automated Vehicles Research Forum.

The forum was held by the Insurance Institute of Canada at the National Club in downtown Toronto.

Grush said the industry is currently in a “switch-over” from manual to “highly automatic vehicles,” and suggested there will be an increased use of robo taxis.

“At some point, there will be large areas of many cities that say ‘you can’t come in here with manual vehicle at all,'” Grush told attendees.

Another speaker was Barrie Kirk, executive director of the Canadian Automated Vehicles Centre Of Excellence.

“I am predicting, and others are predicting, that the first fully autonomous cars will be in the showrooms about 2020,” Kirk said.

One audience member asked whether experts are underestimating people’s resistance to turn control of their vehicles over to computers.

“One of the things we have seen in a study that we are currently doing is drivers will want to give over control in the worst possible conditions with the highest risks, so they don’t want to drive in heavy traffic,” said Robyn Robertson, president and chief executive officer of the Traffic Injury Research Foundation. “They don’t want to drive in bad weather, and yet those are the conditions under which these types of technologies at present will likely fail. If we don’t accurately convey the limitations of the technology, we are going to see some very negative consequences and that will in turn make people less inclined to give over control.”

Also speaking at the forum was Paul Kovacs, founder and executive director of the Institute for Catastrophic Loss Reduction.

“It’s a technology that’s going to be offered not too far away,” added Kovacs, who is also president and chief executive officer of Property and Casualty Insurance Compensation Corporation (PACICC). “The government seems to want to facilitate making it available. There will some who will want to use it, who will be allowed to use it and will be looking for insurance to be able to use the technology.”

The report that Kovacs wrote – titled Automated Vehicles: Implications for the insurance industry in Canada – was released May 3. The report makes several recommendations to the insurance industry. One of those recommendations is to form a joint working group with the Canadian Council of Insurance Regulators “to clarify the expected regulation” of insurance for both self-driving and semi-automated vehicles.

“There is a window right now, of at least five years, for the industry and for individual companies to get their act together and to get in front of this,” Kovacs said Wednesday. “I think those who understand and are really on top of the issue are the ones that will come out the other end feeling good about the transformation that’s coming. People who don’t take advantage of the next five years, perhaps 10 years, they are the ones who will be constantly responding and reacting and will be in a very uncomfortable situation for an extended period of time.”

One ongoing issue will be cyber security, Kirk warned.

“Let’s be realistic. We will never ever completely solve the cyber security threat,” Kirk said.

“If you see young kid up on the sidewalk chasing a soccer ball and running toward the road, the human reaction is to brake,” he said. “As a human, you know there’s a real risk that that kid might run into the road.”

Regardless of how soon fully autonomous vehicles hit the roads, “the pace of change in the vehicles that we will see in the next five to 10 years is unlike anything in my lifetime, so this is a challenge for the industry,” Kovacs said.

One challenge is the fact that courts and insurers will “need to determine the shared responsibility of the drivers, vehicle owners, automakers, vendors, software engineers and vehicle maintenance professionals,” Kovacs wrote in the report for the Insurance Institute.

“Every time there was a collision, the role of the adjusters was to figure out what percent of the problem was Driver 1 and Driver 2,” Kovacs said Wednesday. “Drivers are responsible almost all the time and that is the basis of what we do. But that is not what it’s going to be. It will be the vehicle’s fault, and figuring that out is not what we as an industry have been doing for a while, so we have to learn – what are we looking for? Who do we go after if it’s the vehicle?”

One audience member asked whether manufacturers will be willing to accept liability.

“Manufacturers will accept liability for their products assuming that the vehicles follow the rules of the road,” Robertson predicted. “The question is, do drivers want to drive that way? With any software – whether it’s phones or whatever – people want to increasingly customize that software to their own preferences and I wouldn’t be surprised if we see drivers wanting to customize the software to their own driving style, which may have implications on whether or not manufacturers will want to accept liability for their products.”