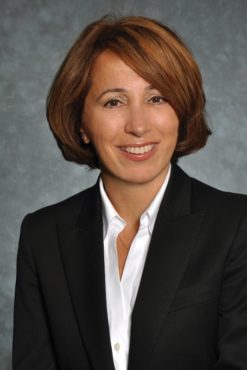 In awarding Wright (pictured right) the designation, the IIC said in a press release on Wednesday that it is recognizing her strong support for professional development.

“Silvy has repeatedly shown vision and purpose in giving people the chance to succeed in their work and make life better for others,” said Peter Hohman, president and CEO of the IIC, in the release. “As just one of many examples, her ingenuity and dedication is reflected in how Northbridge empowers their employees to make a difference at work and in the community.”

For more than a decade, Wright has fostered Northbridge’s commitment to education through the institute, making Chartered Insurance Professional (CIP) courses integral to Northbridge’s training program for new employees, IIC said in the release. Since 2005, more than 100 trainees have participated in more than 60 one-week courses at institute offices in Toronto.

Wright first became directly involved with the institute as vice chair, membership-at-large in 2011. She went on to chair the Institute’s board of governors in 2013-14.

“I am proud to have played a role in the institute’s journey and am honoured to receive this recognition,” said Wright. “The work we have done to leverage technology in meeting the ever-changing demands and expectations around how we educate our students is particularly exciting and I look forward to seeing how we continue to evolve as an industry in this space.”

“Merging three companies takes knowledge, skill and strength,” noted Hohman. “Throughout her career, Silvy has demonstrated knowledge and ability at the highest level within the business, making her a natural choice to receive the Honorary CIP.”

The HCIP is a non-academic way for the institute to acknowledge senior industry executives who do not have an institute designation, but who “distinguish themselves as passionate ambassadors of continuing professional development and actively promote participation in Insurance Institute programs,” the release noted.

Ted Teterenko, a volunteer at the Insurance Institute of Canada for more than 30 years, was recognized with the Award of Merit on Nov. 9.

Teterenko (pictured left), a volunteer at the institute for more than 30 years, was recognized with the Award of Merit, the institute’s most prestigious non-academic award, on Nov. 9, IIC noted in the release.

“Ted has been a special part of the Insurance Institute community in so many different ways,” Hohman said in a statement. “He’s well known to us as a prize-winning student, knowledgeable instructor, dependable exam proctor, valued board member and a longtime Master of Ceremonies at the Insurance Institute of Manitoba’s annual convocation ceremony. It’s my pleasure to celebrate the many things Ted has done to further professional development for himself and so many others.”

Teterenko, who has come out of retirement to do financial analysis and adjust business interruption, property and liability claims for QA Adjusting Company said in the statement that he was humbled by the recognition and honour of this award. “Throughout my involvement with the Insurance Institute, the enthusiasm and dedication of students, employers, fellow board members and the Insurance Institute made my experience truly memorable,” he said.

Teterenko joined Manitoba Public Insurance (MPI) in 1978. In several supervisory and managerial roles, he adjusted a wide variety of claims and was MPI’s leading authority on auto claims. He retired from MPI in 2012 as director of urban service centre operations.

In 1984, Teterenko attained his Associate of The Insurance Institute of Canada designation, the precursor to the CIP designation. He attained his Fellow Chartered Insurance Professional (Claims) designation in 1998, his MBA in 2003, and his second FCIP (management) in 2004.

He taught courses, mostly in claims, from 1986 until his election to the Governing Council of the Manitoba Institute in 1998. He served on Manitoba’s governing council as vice president from 2007-09 and as president from 2009-11, IIC added. Throughout his time as president, Teterenko was a representative for Manitoba on the national board of governors. And from 2011 to 2013, he served as vice chair-western provinces on the national board.