A standard on flood resiliency for commercial real estate could be coming out this year. 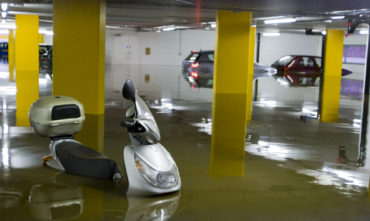 The Intact Centre for Climate Adaptation is working on a document intended to help commercial insurance brokers and real estate companies reduce flood risk for commercial property, said Blair Feltmate, head of the Intact Centre, in an interview with Canadian Underwriter.

The standard “should be finished Q4 2019,” Feltmate said. “It’s deployment of initiatives as simple as, for example, [placing] what look like speed bumps at the top of the ramps that go down into the underground parking.”

“We had about 70 to 80 mm of rain over a six-hour period in downtown Toronto,” Feltmate said in an interview. “That caused massive flooding in the underground parking in lots of the commercial towers downtown including, for example, Sun Life. Their brand new flagship building, the whole basement flooded.”

During such storms, water tends to build up on the street, said Feltmate. “Then the ramp into the underground parking almost functions as a conduit to direct water into underground parking. If you were to design a way to put water underground into a parking lot, you couldn’t do better.”

The Intact Centre for Climate Adaptation is a University of Waterloo Faculty of Environment research organization that gets money from Canada’s biggest property and casualty insurer. The centre is working on the commercial real estate flood risk document with two real estate groups, Feltmate said. One is REALPAC, an industry association that includes real estate owners and investors such as pension funds. The other is the Building Owners and Managers Association.

Feltmate describes Weathering the Storm as a “seed document” that would be used as the basis of a more formal standard, which has yet to be developed.

Another Intact Centre seed document is on standards for new residential development.

Using those documents, the National Research Council and the Standards Council of Canada could issue a request for proposals for a contract to take those documents to “translate them to the more formalized structure of a flood resiliency standard,” said Feltmate. “We are halfway through the process right now to get to the final standard.”

Once a formal standard is in place for Canada, it is up to the provinces and territories to decide whether to change laws such as municipal planning laws and building codes, said Feltmate.

Weathering the Storm includes measures like clearing leaves and debris from catch basins and re-grading lots and roads so that water flows away from properties after it rains.