SHERBOOKE, Que. – Jury selection is set to begin today in the trial of three men charged in the rail disaster that killed 47 people in Lac-Mégantic, Que. 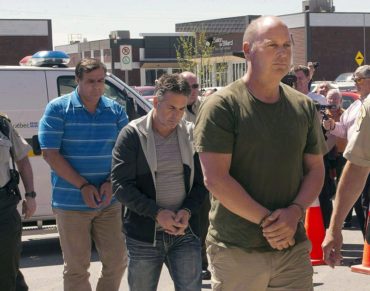 Former Montreal Maine and Atlantic Railway Ltd. employees Tom Harding, right, Jean Demaitre, centre, and Richard Labrie are escorted by police to appear in court in Lac-Megantic, Que., on Tuesday, May 13, 2014. The trial later this year for three ex-railway employees charged criminally in the Lac-Megantic train disaster will be heard by a bilingual jury in another town. THE CANADIAN PRESS/Ryan Remiorz

The three men have pleaded not guilty to all charges.

The trial is set to last until Dec. 21, and is being held in Sherbrooke, Que.

On July 6, 2013, a runaway train carrying crude oil derailed in the tiny Quebec community and exploded, destroying much of the city’s core and leaving dozens dead.

The bankrupt former railway company Montreal Maine and Atlantic Railway has also pleaded not guilty to similar charges and will face a separate trial at a later date.