At least 14 people have been injured by a strong earthquake that struck off Japan’s northeast coast early Tuesday morning, the Associated Press has reported. 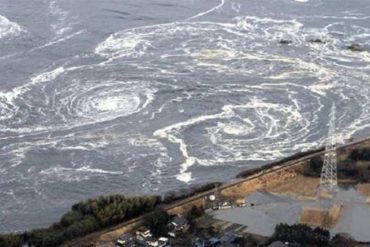 The Japan Meteorological Agency has warned that another large earthquake ccould be expected within the next few days. Photo: @FinancialXPress.

The earthquake – registering between magnitude 6.9 and 7.4 – struck at about 6 a.m. local time on Nov. 22, 40 kilometres off the coast of Sendai, according to Dr. Robert Muir-Wood, chief research officer at Risk Management Solutions, Inc. (RMS). The earthquake is believed to be another “aftershock in the long-running sequence” triggered by the giant magnitude 9 Tohoku earthquake in March 2011, Muir-Wood added in a press release.

The Japan Meteorological Agency has warned that another large earthquake could be expected within the next few days.

“In this region, the 2011 earthquake is not considered to have fully relieved the plate movement on the underlying mega-fault,” Muir-Wood continued. “So some experts in tectonics believe another giant earthquake, greater than Mw8, is still due on the southern continuation of the plate boundary, offshore from the Pacific coast east of Tokyo.”

RMS said in the release that preliminary damage reports have showed that the earthquake and resulting tsunami have not caused any “significant damage.” The earthquake generated a tsunami of up to 1.4 metres in height at Sendai Port, about 70 km north of Fukushima, with wave height of up to 0.6 metres recorded elsewhere along the northeast coast of Japan.

Some factories and businesses in Fukushima Prefecture were temporarily suspended during the earthquake, though most have reopened since the tsunami warning was cancelled.

According to the U.S. Geological Survey (USGS), the population in this region resides in structures that are resistant to earthquake shaking, though some vulnerable structures exist. As well, the USGS has reported that recent earthquakes in this area have caused secondary hazards, such as landslides and fires that might contribute to losses.