Despite seeing a “major claims increase due primarily to the Fort McMurray fires in Alberta, Canada” and a challenging market environment, Lloyd’s of London has reported a profit of 1.46 billion pounds – or nearly $2.5 billion – for the first half of 2016. 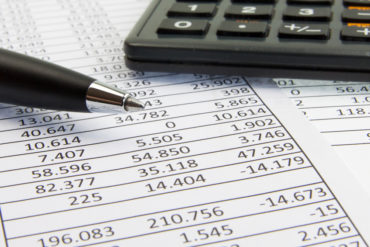 Lloyd’s released its 2016 interim results on Thursday. The figures show an increase in profits of 0.26 billion pounds from the same period last year for the world’s specialist insurance and reinsurance market. Lloyd’s also reported a combined ratio of 98%, up 8.5 points from 89.5% in the first half of 2015.

“Lloyd’s combined ratio increased to 98.0% for the first six months of 2016 due to an increase in expense and attritional loss ratios, an increase in catastrophe losses, and a reduction in reserve releases,” the report said. “The rising attritional loss and expense ratios pushed Lloyd’s combined ratio higher than the competitor group weighted average (95.1%) for the first time since 2011.”

“These results reflect the highly competitive environment we are operating in, but they demonstrate that Lloyd’s is in robust financial shape,” said Lloyd’s chief executive Inga Beale, in a statement. “Clearly the UK’s referendum on its EU membership is a major issue for us to deal with and we are now focusing our attention on having in place the plans that will ensure Lloyd’s continues trading across Europe.” 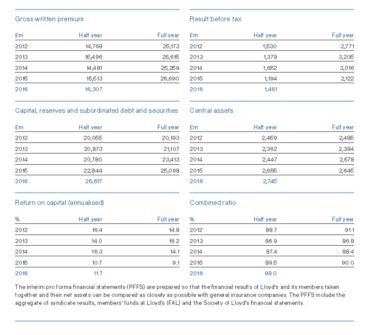 “With continuing low interest rates, that show no immediate sign of changing, an unparalleled amount of capital coming into the market and the impact of the Fort McMurray fires in Alberta, Canada on major claims, our underwriting profit fell by £0.85 billion on the previous period,” added a joint statement from Beale and Lloyd’s chairman John Nelson. “Premium rates continue to be under pressure.”

The Lloyd’s market’s year accident year ratio for the six months to June 2016 was 103.7% compared to 97.5% for the same period last year. The Lloyd’s report said that the deterioration is partly explained by the increase in the level of claims arising from major losses, as well as by an increase in smaller, attritional loss activity.

“Both the reinsurance and property classes have been impacted by a number of natural peril events, including earthquakes in Japan and Ecuador, and losses from several storms in the southern states of the USA,” the report said. “The largest of the events is the wildfire that struck Fort McMurray in Canada in May 2016. This was a more costly event that any in the first half of 2015.” Major losses added 5.7% to the combined ratio for the first half of 2016 compared to 2.7% in the equivalent period in 2015.

The report also noted that new entrants and licences continue to expand the global reach of the market. For example, Nelson said that in 2016, Lloyd’s applied for offshore reinsurance licences in India and Malaysis and opened a new office in Bogotà, Colombia.