“It remains too early to provide a specific economic or insured loss estimate at this time,” Impact Forecasting stated in a cat alert.

An earthquake, measuring 6.2 on the Richter scale, hit at 1:36 a.m. Greenwich Mean Time Wednesday morning (8:36 p.m. Tuesday Eastern time and 3:36 a.m. local time), the United States Geological Service reported. The epicentre was 10 kilometres southeast of Norcia. The Associated Press reported shaking was felt in Rome, about 170 kilometres to the southwest. 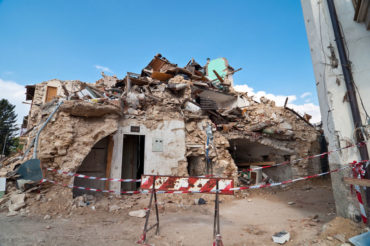 “An unofficial count of fatalities was 65, though more than 100 people were feared to be missing,” said Impact Forecasting, a Chicago-based unit of Aon Securities Inc., the reinsurance broker of London-based commercial brokerage Aon.

USGS “has preliminarily estimated” there is a 62% probability that economic damage will exceed US$1 billion, Impact Forecasting stated.

“It is expected that the insured loss portion of the overall economic cost will be much lower,” Impact Forecasting added. “Earthquake insurance penetration is relatively low for the residential sector in Italy and large historical events have shown a significant discrepancy in the economic-to-insured loss ratio.”

The tremor was the result of “shallow normal faulting” on a fault running northwest and southeast in the Central Apennines mountain range, USGS stated. That mountain range “runs from the Gulf of Taranto in the south to the southern edge of the Po basin in northern Italy,” USGS added. It was formed as a result of subduction and that includes subduction “of the Adria micro-plate beneath Eurasia and the Apennines from east to west, continental collision between the Eurasia and Nubia (Africa) plates building the Alpine mountain belt further to the north and the opening of the Tyrrhenian basin to the west,” USGS stated.

The part of Italy affected by Wednesday morning’s earthquake “consists of structures that are a mixture of having both extremely vulnerable and earthquake-resistant construction,” Impact Forecasting stated. “The predominant vulnerable building types in Central Italy are unreinforced brick with mud and mid-rise nonductile concrete frame with infill construction. The combination of illegal building construction and the use of low-quality cement and inadequate supporting iron rods has been a known issue in this part of the country.”

#ItalyEarthquake: search & rescue teams & sniffer dogs from @crocerossa are on the ground looking for survivors. pic.twitter.com/BJcjgiOHbN

The “unofficial count of fatalities was 65, though more than 100 people were feared to be missing,” Impact Forecasting added.

“In some instances, towns were either completely flattened or a high percentage of structures were severely damaged.”

There have been “several significant earthquakes” in Italy’s central Apennine region, USGS noted, including a 6.7 quake Jan. 13, 1915, which killed about 32,000.

“In the aftermath of the April 2009 magnitude-6.2 earthquake in L’Aquila, a study from the European Center for Training and Research in Earthquake Engineering indicated that as many as 80,000 public buildings in Italy remained unsafe despite the enforcement of building construction,” Impact Forecasting said Wednesday. “However, structures that have been built to modern codes have largely performed well during recent strong earthquake events.”

The 2009 disaster “prompted economic losses” of nearly US$3 billion (with insured losses listed at nearly US$560 million), adjusted for inflation to this year, Impact Forecasting reported.