The province of Manitoba will add vital information to its flood mapping inventory for three of its priority watersheds, the provincial and federal governments announced on Thursday. 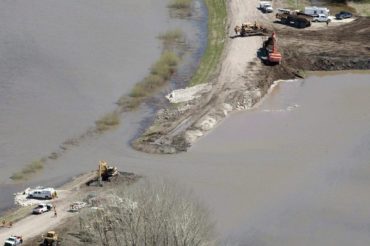 The breach in the dike at the hoop and holler bend is seen along the Assiniboine River outside of Portage La Prairie, Man, Saturday, May 14, 2011. A report commissioned by Manitoba warns flood protection in the province has dozens of significant weaknesses and needs $1 billion in upgrades now to prevent billions in damage down the road. THE CANADIAN PRESS/Jonathan Hayward

A press release from Public Safety Canada said that $794,520 in federal funding has been provided over three years to the province of Manitoba under the National Disaster Mitigation Program (NDMP) to “better plan for and prevent the acts of flooding.” The province said in a statement that the priority areas identified for the funding are the lower Assiniboine River (from Portage la Prairie to the west Perimeter Highway), the Whitemud River and the Souris River, a project the federal government says is valued at approximately $1.6 million.

Manitoba will use Light Detection and Ranging (LiDAR) remote sensing technology to produce these new flood-risk maps, the statement reported. LiDAR uses laser technology to collect accurate, continuous elevation data, known as topographic data, over relatively large areas. Manitoba has approximately 40,500 square kilometres of high altitude aerial LiDAR within its elevation library. An additional 29,185 square kilometres is being collected and will be added to the elevation library in 2018. This collectively represents 67% of southern Manitoba, the statement pointed out.

“Identifying the height and extent of a potential flood event is critical to support informed decisions and investments to reduce the impacts of flooding on communities,” Schuler said. “Manitoba is one of the best prepared provinces to respond to flooding and mitigate damages. The funding announced today will help expand the mapping of flood-prone areas of the province to better forecast and prepare for what nature sends our way.”

Goodale noted that “weather-related natural disasters are getting more severe, more frequent, more damaging and more expensive. This is a threat not only to the safety of our communities, but to our economic stability. The Government of Canada is determined to reduce these risks in partnership with provinces and territories. The project announced today will help the Government of Manitoba better prepare for and respond to flooding.”

According to the release from the federal government, the NDMP reflects an investment of $200 million over five years, of which $183 million is available for cost-shared, merit-based projects with provinces and territories to reduce the impact of natural disasters. The Government of Canada cost-shares up to 50% of eligible expenses for provincial projects and up to 75% of eligible expenses for territorial projects. Since the launch of the program in 2015, approximately $47 million in funding has been committed to provinces and territories.

The federal government is also:

The federal government reported that the Insurance Bureau of Canada said that insured damage in 2016 topped $4.9 billion, passing the previous annual record of $3.2 billion set in 2013, and that the annual economic cost of disasters around the world has increased five-fold since the 1980s. Flooding damage has accounted for 80% of federal disaster assistance payments over the past 20 years.