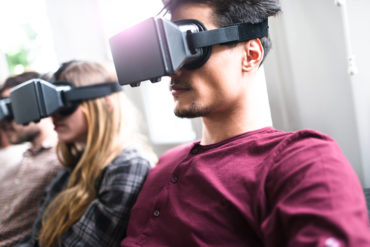 Ron Schuler, Manitoba’s Minister of Crown Services and MPI, announced the DRIVR-X platform on Friday. Through the use of VR headsets, simulated vehicles and intricate sensor systems, the platform allows participants to “explore a three-dimensional VR environment with multiple story lines that require them to make important, life-changing decisions about distracted driving, impaired driving and speeding,” MPI explained in a press release.

“There’s no better way to reach young drivers than through the mediums they relate to the most,” Schuler suggested. “The VR experience created by Manitoba Public Insurance is one such technology that will give our young people the power of choice when it comes to making safe driving decisions.”

DRIVR-X was introduced to students from a Winnipeg high school at MPI’s Physical Damage Centre. “The new virtual reality experience immerses users in a virtual environment that mimics realistic experiences and temptations facing new young drivers today,” the release said, adding that students at the event were also given a guided tour of the corporation’s vehicle damage compound, “where they saw first-hand the real life consequences of crashes involving speed, distracted and impaired drivers.”

“This new state-of-the-art technology will be made available in high schools and at community events throughout Manitoba starting immediately,” said Ward Keith, vice president of loss prevention and communications with MPI. “Our hope is that these realistic experiences will bring the dangers and consequences of unsafe driving to life for new young drivers. In doing so, we hope to spark important conversations about the importance of making safe driving decisions that can literally protect them for a lifetime.”

Participants in the live interactive experience will also receive portable VR viewers, making it possible to share their experiences with friends and family through mobile devices. Additionally, an online contest will offer people the chance to win their own HTC VIVE VR system.

Keith said for MPI, the key is getting young drivers talking to each other about the dangers of driving while impaired or distracted, or driving over the speed limit or too fast for road conditions. “Our goal is for our newest drivers to learn from each other and in doing so, create a stronger road safety culture among a driving population that continues to be over-represented in collisions, fatalities and serious injuries.”

According to MPI, distracted driving is a “leading contributing factor in total collisions in Manitoba,” with nearly 30 people killed on provincial roads each year due to distracted driving. Approximately one in every five fatal collisions in Manitoba is linked to impaired driving, while speed is a contributing factor in nearly 20% of those killed annually.