SUMMERSIDE, P.E.I. – Fire officials are trying to determine the cause of a massive fire that destroyed a farm equipment dealership in Prince Edward Island. 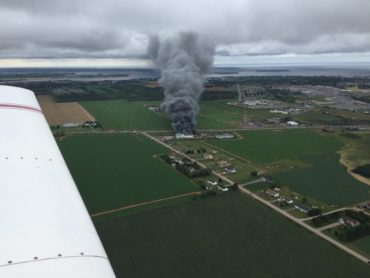 The CEO of Green Diamond Equipment estimated that the fire caused “millions of dollars” in damages. Photo: @yygpilot.

Workers had to be evacuated from Green Diamond Equipment in Summerside late Saturday morning as flames and smoke billowed from the building and ammunition inside detonated.

She says they lost the whole building, a shop, vehicles and customers’ equipment, but luckily no one was hurt.

He says it took fire crews three hours to finally extinguish the flames.

As many of you have may already heard, a fire broke out this morning at our Summerside store. We are thankful and… https://t.co/Dxrt13rmZJ