Canada’s federal environment and climate change department “should work with partners” to figure out how to produce data used to measure intensity, duration and frequency of storms, and the National Research Council should “incorporate climate change trends” when developing structural design provisions in Canada’s model building code, environment and sustainable development commissioner Julie Gelfand suggested in a report released Tuesday. 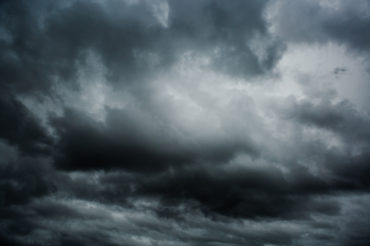 In that report – Mitigating the Impacts of Severe Weather – Gelfand noted that last year, the availability for overland flood coverage for residential properties was “still quite limited” and recommended that the federal public safety department work with other organizations to develop standards for floodplain maps.

“National Research Council Canada should incorporate climate change trends into the National Building Code’s structural design provisions, to take into account the expected increase in frequency and severity of weather events that can directly affect buildings,” the Office of the Auditor General started in the report, which was one of three 2016 Spring Reports of the Commissioner of the Environment and Sustainable Development released May 31. 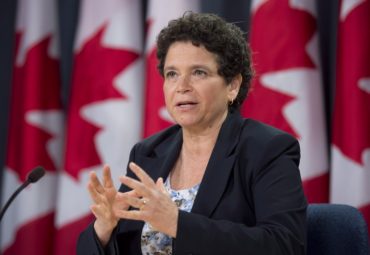 The topics of the other two reports released Tuesday were chemicals in consumer products and cosmetics and federal support for sustainable municipal infrastructure.

Both the report on federal support for sustainable municipal infrastructure and on mitigating the impacts of severe weather “reinforce previous Insurance Bureau of Canada findings,” IBC stated May 31 in a release.

In that report, Gelfand noted that NRC agrees with the recommendation to incorporate climate change into the national building code. That code is one of six model construction and fire codes developed by the Canadian Commission on Building and Fire Codes (CCBFC). The provinces and territories have jurisdiction over building codes but normally use the NRC-developed national code as a model.

CCBFC, an independent committee of volunteers, “will begin working on climate change adaptation by July 2016 for the 2015-2020 code cycle, with completion anticipated by 2020,” according to the Mitigating the Impacts of Severe Weather report. “Weather trends, increasing severity, and the effect on buildings and homes will be considerations as the Committee develops technical changes. Commencing 2016, National Research Council Canada code staff will work with other federal departments (such as Environment and Climate Change Canada and Natural Resources Canada) to obtain the latest data and trends so that these values are incorporated into the Committee’s deliberations and technical solutions.”

The report is based on an audit of Public Safety Canada, National Research Council Canada, Natural Resources Canada, Infrastructure Canada and Environment and Climate Change Canada.

Environment and Climate Change Canada produces information on intensity, duration and frequency (IDF) of storms but “had not continually produced IDF curves” since 2006, according to the report.

“Environment and Climate Change Canada should work with partners to determine how intensity-duration-frequency curves should be produced for decision makers,” the report recommended. [click image to enlarge] 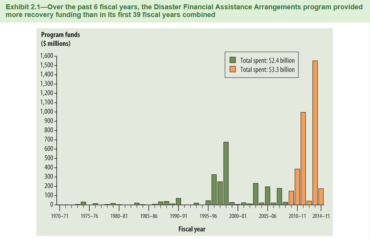 Environment and Climate Change Canada agreed, according to the report, which added the department will “work with partners to investigate and clarify the federal role in how” IDF curves should be produced.

“As part of this, Environment and Climate Change Canada will continue to focus on modernizing its climate data archive,” according to the report. “This will improve the integrity of the data and give efficient and ready access to all users to support a variety of scientific and engineering applications.”

Another recommendation was for Public Safety Canada to work with “key stakeholders” to “develop guidelines and standards for floodplain maps and encourage their consistent application in all provinces and territories.”

“In fall 2014, Public Safety Canada convened an interdepartmental committee to establish national principles, best practices, and guidelines on flood mapping in support of the National Disaster Mitigation Program,” according to the report. “In 2015, Public Safety Canada initiated consultations with key stakeholders on developing these guidelines. The purpose of these consultations is to obtain a national perspective and approach on flood mapping, which will be used to inform long-term mitigation activities and initiatives. Public Safety Canada will continue to work with partners, including federal departments and agencies, provinces and territories, and key stakeholders, to develop and implement these guidelines and standards across the country.”

Insurance providers companies “also highlight floodplain maps as a precondition to enter the residential overland flooding insurance market,” the report added. “Until 2015, Canada was the only G-7 country without residential insurance for overland flooding. Even in 2015, its availability was still quite limited.”

“Commissioner Gelfand’s findings outline the need for a strategic approach to support resiliency through funding infrastructure projects, investing in mitigation, and providing communities with the information and tools they need,” IBC stated Tuesday in a release.

That data is now available to insurers, Craig Stewart, IBC’s vice president of federal affairs, Feb. 1 during the Canadian Catastrophe Conference held by Catastrophe Indices and Quantification Inc. in Toronto.

The data shows 19% of Canadian households are at risk of flood, IBC said in its release May 31.

“Based on these results, IBC believes that Canada’s forthcoming National Climate Strategy must include a national flood program.”