NORTH WILDWOOD, N.J. – A beach town being sued for the drowning death of a man swept out to sea when the sand collapsed underneath him says it is immune from such lawsuits due to a state law governing unimproved public property. 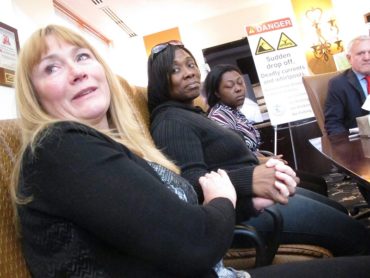 Sandra Smith, left, Tasha Hart, center, and Domonique McNeil, right, speak at a news conference in Egg Harbor Township N.J. on Tuesday Oct. 25, 2016 about the drowning deaths of relatives at a beach in North Wildwood N.J. Lawyers for Smith’s family are trying to get a judge to order that section of beach permanently closed to the public because the sand is prone to giving way under the feet of beachgoers, plunging them into water over their heads. (AP Photo/Wayne Parry)

North Wildwood claims the law puts the risk for use of such property on the user and wants the lawsuit dismissed.

Two others have also drowned from similar accidents there since 2009.

In July 2012, Brad Smith, of Horsham, Pennsylvania, was walking in ankle-deep water at the beach with his daughter when the sand collapsed, plunging them and a friend into the swirling waters. A passer-by on a personal watercraft rescued the girl, who was being held above the waves by her father before he drowned.

His wife, Sandra Smith, wants a judge to order that section of beach closed to the public to prevent another tragedy. That request will be heard Feb. 10.

Domonique McNeil and Tasha Hart also lost relatives to a similar drowning there in 2009. The accident claimed the lives of Jamila Watkins, 27, and Shayne Hart, 15.

In its motion to have the lawsuit dismissed, North Wildwood cites a state law granting municipalities’ immunity from accidents that happen on unimproved public property.

But Smith’s lawyer, Paul D’Amato, says the town was negligent in its supervision of a public recreational facility. In court papers, he alleges the town began supervising the area when its lifeguards began to monitor radio scanner traffic from the unprotected beach, which averaged 12 rescues per summer. They also periodically would take a truck or personal watercraft to the area to warn beachgoers of the dangers the area posed, according to court documents.

He wrote that such efforts “evidenced an intent to supervise by way of monitoring, entering into and becoming a part of the activity itself from which the injury sprang.”

It argued that governments “would never see the end of litigation” for injuries caused by unimproved property if a plaintiff could simply argue that the area was dangerous.

In a deposition in the case, lifeguards said they knew of potentially deadly conditions at their beach for at least six years before Smith drowned.

North Wildwood had posted two signs at the beach indicating swimming was prohibited there. But the signs made no mention of the danger of walking on sand near the water. And Sandra Smith says they were far from the water’s edge when the sand gave way.