No insurer-based new home warranty system for this province

An insurer-based model for new home warranty was under consideration in Ontario but the current government is maintaining the status quo.

“Our government has been looking at the feasibility of a private insurance model for new home warranties and protections in Ontario,” the press secretary for government and consumer services minister Lisa Thompson told Canadian Underwriter Friday. “After extensive consultation with Ontarians, and research within the ministry, it was clear that in order to achieve our goal of increasing consumer protection, the best option is to overhaul the current new home warranty model.”

Government officials were not available for a phone interview. A spokesperson was asked whether the current government favours a multi-provider model, which is what the opposition New Democratic Party proposed in Bill 169, a private member’s bill tabled Dec. 11. It’s the same recommendation made by former judge Douglas Cunningham in a government-commissioned report released in 2017. 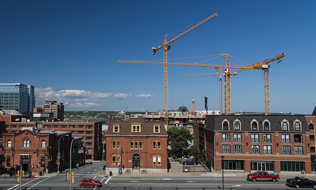 Currently in Ontario, new home warranties are provided by the builders themselves, with Tarion Warranty Corporation providing a backstop.

If Bill 169, the Home Warranties to Protect Families Act, is passed into law, new home warranty would have to be written by a licensed insurance provider and regulated by the Financial Services Regulatory Authority of Ontario just like any other insurance product, an NDP spokesperson told Canadian Underwriter. Bill 169 was tabled by Tom Rakocevic, opposition critic for consumer protection and NDP MPP for Humber River-Black Creek.

Home warranty coverage varies by province. In British Columbia, most new homes must be covered by home warranty insurance, which can only be provided by insurers authorized by the B.C. Financial Services Authority.

In his 2017 report, Cunningham recommended that new home warranty protection be delivered through a competitive model.

“Warranty coverage would move from today’s monopoly, with Tarion as the only provider, to a multi-provider insurance system,” Cunningham wrote in Review of the Ontario New Home Warranties Plan Act and the Tarion Warranty Corporation, released in early 2017. Cunningham was appointed by the government to examine and make recommendations regarding Tarion and the new home warranty program.

Tarion was the subject of an auditor general’s report released this past October. One of the auditor general’s dozens of recommendations was that the government assess whether it should maintain Tarion as the warranty administrator or change to a multi-provider insurance model.

Tarion’s main roles are to ensure builders honour their warranties on new homes and to manage licensing of homebuilders, Auditor General Bonnie Lysyk said in her report.

Homeowners are supposed to ask builders to fix defects before asking Tarion to intervene. “But when a builder fails to act, Tarion provides only two 30-day windows in which homeowners can ask for its help – one at the beginning and the other at the end of that first year, unless it is an emergency,” Lysyk wrote in her report.

Under the current system, “Tarion acts as a surety, stepping in when the vendor has not satisfied the warranty obligation,” Cunningham wrote in his 2017 report on Tarion. “It is the vendor who warrants to a new home owner that the home is constructed in a workmanlike manner, free from defects in material, fit for habitation, built in accordance with the Building Code, and free of major structural defects.”

“Our consultations found that a private insurance model risks diminished consumer protection, higher costs for warranty coverage, decreased government oversight, and increased costs for Ontario’s small builders,” the spokesperson for Thompson told Canadian Underwriter Friday. “Our government thanks MPP Rakocevic for introducing his private member’s bill. We are reviewing the bill and look forward to having the member work with us in our government’s transformation of new home warranties in Ontario,” the press secretary added, alluding to Bill 159, a government bill tabled by Thompson last month.

If passed into law, Bill 159, the Rebuilding Consumer Confidence Act, would improve Tarion’s dispute resolution process and give Tarion “greater ability to scrutinize builder applications and conduct inspections before a homeowner moves in,” the government said Dec. 5 in a release.