For the second time in three weeks, the Supreme Court of Canada announced it is not hearing an appeal – from a plaintiff suing an insurer for breach of contract – of a ruling significantly reducing punitive damages against a carrier found to have breached its duty of good faith. 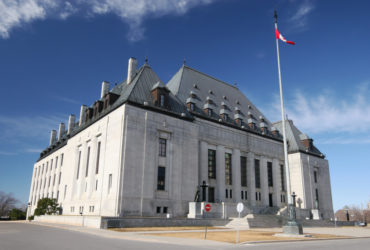 Canada’s highest court announced Thursday it has dismissed an application, from Bruce Brine, for leave to appeal a decision released Nov. 17, 2015 by the Nova Scotia Court of Appeal, which reduced punitive damages against National Life by 88%, to $60,000 from $500,000.

One that did was $1 million, awarded by an Ontario jury, in 1996 against Pilot Insurance Company, which had denied a homeowner claim by Keith and Daphne Whiten, whose home was destroyed by fire in 1994.

“Everyone who investigated the fire in the six months after it occurred concluded that it was accidental,” Mr. Justice John Laskin, of the Court of Appeal for Ontario, wrote in Whiten, adding that an engineering expert retained by Pilot wrote that “the circumstances of the fire would strongly refute considerations of an incendiary fire.” Court records indicate that Pilot turned down an offer by the Whitens to take a polygraph test administered by an expert chosen by Pilot, and that the Insurance Crime Prevention Bureau, reported to Pilot in 1994: “we wouldn’t have a leg to stand on as far as declining the claim,” but Pilot still “continued to allege that the Whitens had set the fire deliberately.”

In a decision released Feb. 5, 1999, the Court of Appeal for Ontario reduced the punitive damages against Pilot to $100,000, in a divided ruling. In dissent, Justice Laskin noted that Pilot “deliberately withheld relevant information from its experts and, instead, provided them with misleading information to obtain opinions favourable to its arson theory.”

But the Whiten case “does not demonstrate that there was such insidious, pernicious and persistent malice as would justify an award” of $1 million, wrote Mr. Justice George Finlayson, of the Court of Appeal for Ontario on behalf of himself and Mr. Justice Marvin Catzman, in explaining why they reduced punitive damages against Pilot.

Pilot’s denial of the Whiten’s claim “was designed to force her to make an unfair settlement for less than she was entitled to,” Mr. Justice Ian Binnie of the Supreme Court of Canada wrote in Whiten. “The conduct was planned and deliberate and continued for over two years, while the financial situation of the appellant grew increasingly desperate.”

In dissent, Mr. Justice Louis Lebel, noted that the “sole purpose” of punitive damages is to “punish bad faith and unfair dealing,” that there is “no evidence that such conduct was a regular incident” of Pilot’s “way of running its business” and that such behaviour is not widespread in the Canadian insurance industry.

“Concerns about industry practices should mainly be addressed through the appropriate regulatory and penal regimes, rather than through haphazard punitive damages awards,” Justice Lebel added in Whiten.

“An award of punitive damages attracts a more focused standard of review than other damage awards,” the Nova Scotia Court of Appeal stated, in November 2015, in its unanimous ruling in Brine, by Mr. Justice Joel Fichaud, Madam Justice Linda Oland and Mr. Justice Ted Scanlan.

In Brine, the courts quoted extensively from Whiten.

“If the award of punitive damages, when added to the compensatory damages, produces a total sum that is so ‘inordinately large’ that it exceeds what is ‘rationally’ required to punish the defendant, it will be reduced or set aside on appeal,” Justice Binnie wrote in Whiten.

However, in Brine, the Nova Scotia Supreme Court “did not sufficiently consider” Justice Binnie’s direction, in Whiten, “to consider whether the total of compensatory and punitive damages is inordinate,” the Nova Scotia Court of Appeal found in 2015.

As of June, 2015, the highest punitive damage award, from a Canadian court, arising from a finding of bad faith against an insurer, had actually been a total of $4.5 million. That was awarded in 2013 — to Luciano Branco — by Mr. Justice Murray Acton of the Saskatchewan Court of Queen’s Bench. But that award was reduced 85% on appeal. Originally, Justice Acton awarded Branco $3 million and $1.5 million – in punitive damages alone – to be paid, respectively, by Zurich Life Insurance Company Ltd. American Home Assurance Company, a subsidiary of American International Group Inc.

On April 21, 2016, the Supreme Court of Canada announced it dismissed Branco’s application for leave to appeal.

Branco, a Portuguese employee of a subsidiary of Saskatoon-based Cameco Corp., had been injured on the job in Kyrgyzstan. AIG was essentially providing the same coverage as if Branco had been covered by Saskatchewan’s Workers’ Compensation Board. Zurich was providing long-term disability coverage.

Brine had been Director of Ports Canada Police in Halifax from 1993 through 1995. After his employment was terminated, he made a claim for long-term disability. National Life approved his application but there were several disputes, including the tax treatment of the benefits paid to Brine and National Life’s reduction of benefits for payments by Canada Pension Plan and Public Service Superannuation.

Among other things,  “National Life breached its duty of utmost good faith by failing to meaningfully address and consider whether it should continue to classify Mr. Brine’s disability benefits as taxable income” following a 2006 Tax Court decision, wrote Justice Bourgeois (who has since been appointed to the Nova Scotia Court of Appeal) in 2014.

As a result, National Life “continued to issue Mr. Brine T4 slips showing the benefits as being taxable income which prompted continued disputes for Mr. Brine with Revenue Canada,” Justice Bourgeois wrote. Based on a Tax Court ruling in 2006, Brine “did not claim the income, but because a T4 slip was issued, Revenue Canada made repeated contacts with him inquiring as to his failure to claim, and again re-assessed his income in the 2009 taxation year to include the income issued by National Life.”

However, the insurer’s “obstinacy on the T4 slips stemmed from apathy not avarice,” the Nova Scotia Court of Appeal found.