AMHERST, N.S. – Nova Scotia imposed new restrictions at its provincial boundary with New Brunswick on Monday as part of a series of measures aimed at tightening social distancing requirements to prevent the spread of COVID-19.

Under the restrictions that took effect at 6 a.m., anyone coming to Nova Scotia through land, sea and air entry points will be stopped, questioned and told to self-isolate for 14 days.

Exemptions are allowed for healthy workers in the trades and transport sectors, as well as those going to work in areas such as health care and for patients who need access to essential health services.

Amherst, N.S., Mayor David Kogon, whose town is near the provincial boundary, said he supports the province’s move to enforce screening as a balanced approach that addresses both health and economic concerns.

Kogon said the exemptions are important to towns like his and Sackville, N.B., where a number of Amherst’s town staff live. Cross-border movement will be allowed for those who work in town services that are considered essential, he said.

Otherwise the restriction applies to all non-essential travel. 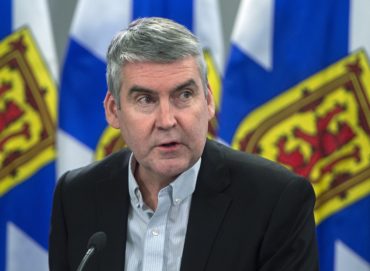 “So it’s not that they’ve actually closed the border, but they are screening at the border and allowing people to go through when it’s essential that they do,” Kogon said.

The mayor said while health concerns are paramount, the commercial implications of closing the border altogether can’t be ignored. Kogon said up to $55 million in commercial goods flows across the Nova Scotia-New Brunswick boundary every day by highway transport and rail.

“That’s huge for our commerce in Nova Scotia,” he said.

In Sackville, Mayor John Higham said that under normal conditions there are typically so many business and personal interactions between two provinces it’s as if “the border doesn’t exist.”

He said it remains to be seen how much inconvenience will be caused by Nova Scotia’s move, although he supports it.

“We do have people who run businesses from one side or the other … so those people are going to be in more difficulty if their stores are open,” said Higham. “So it’s going to affect individuals quite a bit I would suspect.”

Leeya Hicks lives in Amherst but owns Joey’s Pizza & Pasta in Sackville, where she has been continuing to run a takeout and delivery service.

Hicks said she had no problem getting to work on Monday, but would find out on her return ride home what the actual requirements for her will be and whether she will have to self-isolate.

“It may be an issue,” said Hicks. “I’m told I should be all right but I won’t know until I go home.”

As it is, Hicks said she’s lost about 90 per cent of her normal business and she’s had to reduce staff from 16 to two.

“I’m down to me and one other person working,” she said.

Members of the RCMP were at the border crossing on Monday to help with vehicle checks, which were conducted at the inbound weight scales off the Trans-Canada Highway, spokeswoman Cpl. Jennifer Clarke said in an email.

“Our current role is to assist provincial personnel as they set up the area in relation to the province of Nova Scotia’s recent declaration of a state of emergency,” said Clarke.

Nova Scotia Premier Stephen McNeil declared the provincial state of emergency on Sunday, saying it was necessary because people had been blatantly ignoring a previous order for social distancing and self-isolation.

In addition to the border measures, the province announced that people were prohibited from gathering in groups larger than five. Individuals caught violating the limit would face a $1,000 fine, while businesses would face a $7,500 fine.

– By Keith Doucette in Halifax

This report by The Canadian Press was first published March 23, 2020.