Number of lightning-related homeowners insurance claims in the U.S. down slightly in 2015, but severity up 7%

The number of homeowners insurance claims from lightning strikes in the United States fell in 2015, but the total insurers paid on those claims rose by nearly 7% from 2014, according to a new analysis by the Insurance Information Institute (I.I.I.). 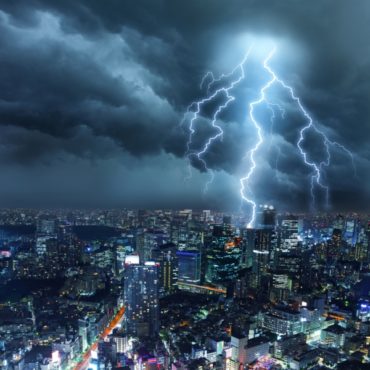 I.I.I. said in a statement on Tuesday that US$790 million in lightning claims was paid out last year to nearly 100,000 policyholders. An analysis of homeowners insurance data by the I.I.I. and State Farm found that total insured losses from lightning rose 6.9% from 2014 to 2015, although losses have declined 23.6% overall since 2010.

The analysis also found that there were 99,423 insurer-paid lightning claims in 2015, down 0.4% from 2014; the average lightning claim paid was 7.4% more than a year ago: $7,947 in 2015 vs. $7,400 a year earlier; and the average cost per claim rose 64% from 2010 to 2015. Regarding the average cost per claim, by comparison, the Consumer Price Index (an inflationary indicator that measures the change in the cost of a fixed basket of products and services, including housing, electricity, food, and transportation) rose by 9% in the same period. 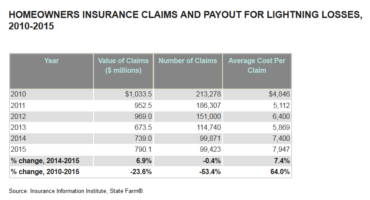 “The average cost per claim is volatile from year to year,” said James Lynch, vice president of information services and chief actuary with I.I.I. in the statement. “But it has generally continued to rise, in part because of the enormous increase in the number and value of consumer electronics including increasingly popular home automation systems.”

The drop in the number of claims is consistent with data from the National Weather Service, which recorded 334 events with property damage in 2015, down from 401 such events a year earlier. There were 135 days in 2015 in which lightning caused property damage, while 128 such days were recorded in 2014.

Florida, the state with the most thunderstorms, remained the top state for lightning claims in 2015, with 11,898, followed by Georgia, Texas and Louisiana, respectively.

I.I.I. said in the statement that damage caused by lightning, such as fire, is covered by standard homeowners insurance policies. Some policies provide coverage for power surges that are the direct result of a lightning strike. “Not only does lightning result in deadly home fires,” said Lynch, “it can cause severe damage to appliances, electronics, computers and equipment, phone systems, electrical fixtures and the electrical foundation of a home.”