FORT MCMURRAY, Alta. – Fire officials are bracing themselves for a long, long fight against the blaze that forced the evacuation of Fort McMurray and has eaten up more than 1,500 square kilometres of northern Alberta forest.

“Unless we have a significant rain event of 100 millimetres of rain, we expect to be out fighting the fire in the forested area for months to come,” Chad Morrison with Alberta Wildfires told a media briefing Saturday afternoon.

“That’s not uncommon with such large fires.” 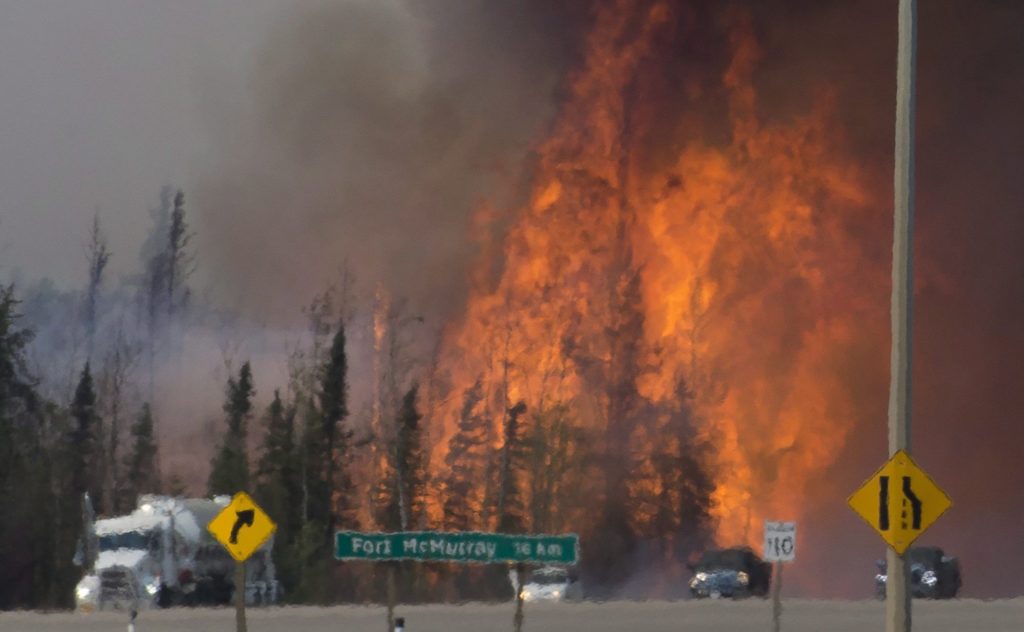 Heat waves are seen as cars and trucks try and get past a wild fire 16km south of Fort McMurray on highway 63 Friday, May 6, 2016. THE CANADIAN PRESS/Jonathan Hayward

As for the city of Fort McMurray, he said he expected they would get a good handle on the situation “over the next coming month or two.”

There still is no timeline for any of the 80,000 evacuated residents to be allowed back into their homes, but the Alberta government has begun preliminary planning, though it stresses fighting the fire is still the first priority.

Premier Rachel Notley said officials expected the fire to possibly double in size on Saturday and reach the boundary with Saskatchewan to the east.

The good news was that the fire was burning away from communities. Firefighters continued working to protect the downtown and homes in Fort McMurray and held the line for a second straight day, Notley said.

Easterly winds over the last few hours have already started pushing fires back to NW as seen by dark red dots #ymm pic.twitter.com/IYRq7K1KjY

She added the gas supply has been turned off in the city and the power grid has been damaged. Water in the city isn’t drinkable and hazardous material will have to be cleaned up to make the community safe.

“The return won’t be in coming days,” said the premier. “Once the immediate fire damage is completed there will be an enormous amount of work to do to make the city safe and habitable.”

RCMP Insp. Kevin Kunetzki said Saturday that during their checks of houses in the city, officers are seeing significant signs of water and smoke damage.

Scott Long of the Alberta Emergency Management Agency said that may have been one of the costs of protecting the community.

He said firefighters use large, industrial sprinklers to “spray continuous amounts of water on houses to protect them from embers, sparks, etc., from spontaneous combustion, from the heat. So it’s quite possible there could be water damage.”

On top of that, a few days ago water bombers were dropping their loads on some of the houses in the highest-risk neighbourhoods. 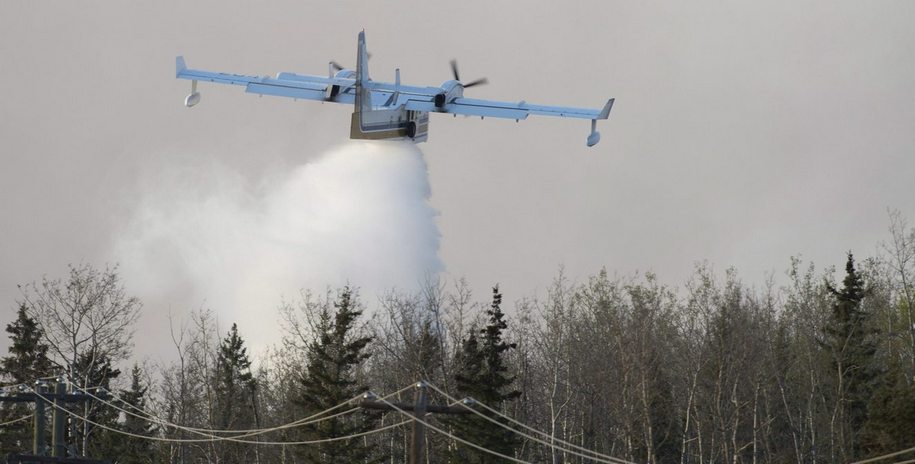 “So a little bit of water damage in the basement is acceptable at this point,” Long said.

Non-essential personnel at both Syncrude and Suncor oil facilities in the area have been evacuated as a precaution.

1/3 Syncrude has made decision to shut down operations and remove all personnel from site. This includes both mines and Upgrader. #ymmfire

“We do expect the fire to bump again the edge of the south end of the Suncor facility today,” said Morrison, but he added the companies’ highly trained industrial fire department would remain to protect the facilities.

“These sites are very resilient to wildfires, largely because they’re free and clear of vegetation and trees.”

Noralta Lodge, an oilsands housing facility where RCMP and firefighters have been staying, was placed on a two-hour evacuation notice.

“They have a solid evacuation plan in place,” said Morrison. “If they’re under any kind of a threat there will be a safe, controlled evacuation.”

Federal Public Safety Minister Ralph Goodale said firefighters from other provinces were being brought in to relieve those who have been battling what he calls “this beast of a fire” for a week.

Eighty firefighters from Ontario have already arrived. Goodale told a news conference in Regina that another 44 are on their way from Quebec and 22 from New Brunswick. Equipment, such as pumps, hoses and tankers, are also coming from other provinces.

“What we’re trying to do, with the co-operation of other provinces and territories, is bring in rotations of other firefighters that can give them a break.”

Fire crews in #Sudbury board a plane to #FortMcMurray pic.twitter.com/ooCesc31xn

Plane of fire fighters from #Sudbury area take off to #FortMcMurray pic.twitter.com/9z8RoaJJtR

These guys (in yellow) have been on the job for 5 weeks and fought a brave a battle holding the fire line. #ymmfire pic.twitter.com/LuYXN5FlPy

Please keep all the FF's in your thoughts tonight as they work to protect what they can. #ymmfire #FortMacFire pic.twitter.com/CPej6Kx4of

Hot, dry and windy: @jwagstaffe explains the weather conditions that are fueling the wildfires in Western Canadahttps://t.co/ekhu1Qfnjl

Alberta, on behalf of all #CAF members, our thoughts and prayers are with you. #ymmfire pic.twitter.com/KQUzAXPV7P

Our thoughts go to those displaced by the #FortMacFires. We wish for their continued safety. #RCAF #Salute Saturday pic.twitter.com/gE0ceKefpU