Insurers are getting a front-row seat in learning the risks that come from aging renewable energy-producing equipment, says an industry expert.

The last 15 years have seen a spark in growth in the area of renewable energy development, particularly in wind and solar. But, similar to the cars we drive, these machines are reaching the point in their lives where they don’t run like they used to, creating claims for the insurance industry, according to Darren Tasker, head of energy and construction in Canada for Allianz Global Corporate & Specialty.

“Renewable energy, to no one’s surprise, has been growing,” he told Canadian Underwriter. “It’s been a focus for both clients and governments — and even insurers and brokers — who are trying to get more green and fall in line with the Paris Agreement.”

The agreement, signed in 2016 by 191 members of the United Nations Framework Convention on Climate Change, outlines that each country must determine, plan, and regularly report on the contribution that it has taken to mitigate global warming. The agreement’s long-term temperature goal is to keep the rise in global average temperature well below 2 degrees Celsius. To accomplish this, reducing emissions was put at the top of the list. 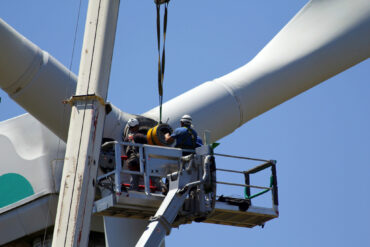 Growth of green-friendly energy production over the past 15 years was initially driven by government incentives for commercial clients and power produced to invest in renewable energy. Now, the push is being driven primarily by corporate environmental social governance (ESG) initiatives.

With that push came a boom of wind turbines and solar panels, Tasker told Canadian Underwriter. But the equipment has aged and is now causing concerns for clients and, in turn, insurers.

“You have some wind turbines that are now getting of age,” he explained. “They’re 12-15 years old. Issues are starting to pop up, [like] mechanical issues. Nothing dissimilar to your car and, after a while, things start to break down.

This type of risk that has insurers paying attention, Tasker observed in an interview.

“From an insurance perspective, [addressing the risk means] making sure that we provide the coverage that you want to provide,” he said. For example, there’s the question about what’s an anticipated business risk and what’s an insurable risk. An insurer will want “to have the proper potential exclusions in place to avoid paying on anticipated business risk,” Tasker said. “That’s a big focus of risk.”