November 26, 2020   by Nicole Thompson and Paola Loriggio - THE CANADIAN PRESS

TORONTO – Ontario is set to cap the fees third-party delivery apps impose on restaurants in regions where indoor dining is prohibited, in a bid to protect what profits restaurants can still make during the COVID-19 pandemic.

The Progressive Conservative government will table legislation today that would give the province the authority to temporarily limit how much apps such as UberEats and DoorDash can charge restaurants in the grey or lockdown COVID-19 restriction zone for their services, the associate minister of small business told a news conference.

“Ontario’s restaurants have been bearing an incredible brunt of the financial burden of this pandemic. Some restaurants have seen traffic plummet by as much as 90 per cent,” Prabmeet Sarkaria said.

“At the same time, food delivery services companies have collected up to 30 per cent in commissions from these restaurants. And they’re enjoying record sales and uptake.”

He said restaurants can expect to see a cap of 15 per cent on delivery fees, with a cap of 20 per cent inclusive of all fees.

It’s similar to what was done in New York City, which recently capped delivery app commission fees at 20 per cent. 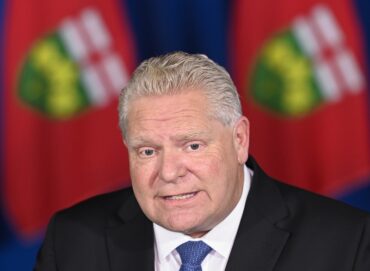 He said the legislation comes after the province consulted with delivery companies, and will protect the pay of their employees and contractors.

The proposed law is meant to provide temporary relief to restaurants that are now forced to rely on delivery and takeout orders as their only source of revenue due to COVID-19 restrictions barring indoor service.

It won’t apply in areas where such measures have been lifted.

Many restaurants across Ontario have struggled to stay afloat during the pandemic, particularly amid rapidly changing public health rules affecting capacity and hours of operation.

Recently imposed 28-day lockdowns in Toronto and neighbouring Peel Region have meant restaurants in those areas are closed to all but takeout and delivery orders, prompting some to push back against the rules.

One west Toronto restaurant was shut down by city officials earlier this week after they say it was found to be serving customers on site.

Premier Doug Ford has repeatedly urged delivery apps to cut their commission fees in light of the pandemic.

Sarkaria noted that SkipTheDishes did so voluntarily, but said that because others didn’t join, the province felt it was necessary to take what he described as unprecedented action to protect small businesses.

“Ontario will be the first province … to implement caps on food delivery service providers through legislation,” he said. “We have worked diligently to ensure that the proposed legislation and regulations help protect restaurants while continuing to protect delivery drivers and consumer choice.”

The legislation, if passed, would apply to the largest delivery companies in the province.

For its part, the CEO of SkipTheDishes said he appreciated the province acknowledging the company’s work, but did not approve of the proposed legislation.

“We are disappointed that they have decided to regulate private enterprise by enforcing a commission cap on food delivery services operating in the province,” Kevin Edwards said in a written statement.

But Toronto Mayor John Tory applauded the move, noting city council unanimously asked the province for such a bill.

“While some companies have offered some help, we have heard loud and clear from restaurants that more needs to be done right now,” he said.