The father of a teen who died in a crash that killed 16 people on a junior hockey team bus is questioning why Ottawa is waiting two years to make seatbelts on new highway buses mandatory. 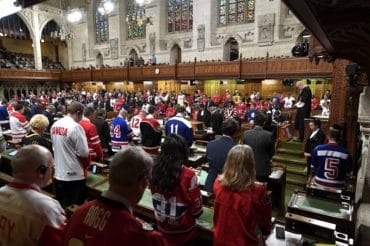 Members of Parliament bow their heads during a moment of silence for the victims of the Humboldt Broncos tragedy during Question Period in the House of Commons on Parliament Hill in Ottawa on Monday, April 16, 2018. THE CANADIAN PRESS/Justin Tang

The team was on its way to a playoff game when the bus and a semi-truck collided at a rural Saskatchewan intersection. Sixteen on board would die and 13 were injured. The truck driver faces dangerous driving charges.

Ottawa first proposed a seatbelt rule more than a year before the crash. The final regulation was announced earlier this month, but it won’t take effect until Sept. 1, 2020.

“Why wouldn’t they bring it in sooner rather than later?” said Russell Herold, whose 16-year-old son Adam was the youngest crash victim. “If it would have saved one life, does that not benefit everyone?”

Internal documents show that in the days following the collision, Transport Canada was weighing whether to move more quickly on seatbelts.

“We’re taking a hard look at the coming-into-force date, and as soon as we can, we’ll provide a specific (question-and-answer document) on the risks/implications of accelerating this date,” Michael DeJong, director general of motor vehicle safety, wrote in an email to colleagues April 8.

The options included moving it up a year or having different in-force dates for large and medium buses.

Despite the Humboldt crash, Transport Canada decided to stick to the 2020 timeline.

“Bus manufacturers have expressed support for the proposed regulations, but have sought adequate lead time for implementation,” bureaucrats wrote in the document.

It said Transport Canada heard that provinces need time to address issues around bus driver liability for child-restraint systems, as well as on standing passengers and unbelted minors.

It also said there would need to be tests to ensure newly purchased buses comply with the regulation.

The new rule applies to newly built buses. Ones already in operation are under provincial and territorial jurisdiction.

Transport Canada says it assumes anywhere from 25 to 75 per cent of buses are already equipped with seatbelts and the overall cost to equip the remainder is expected to be less than $1 million a year.

It determined seatbelts would reduce the probability of fatalities in a collision by 77 per cent in the event of a rollover and by 36 per cent in other types of collisions.

“You’d have to think seatbelts would have done something. We’ve been told by the coroner that everyone was ejected from the bus,” said Herold.

“If you’re seatbelted in and your seat remains in the bus, you’re in a better situation than flying out onto the hard, frozen ground.”

Lewis Smith of the Canada Safety Council said his organization was of two minds when it learned the new regulation won’t be in effect until 2020.

“On the one hand, we feel that this type of regulation is already long overdue, so the fact that it won’t go into place until September 2020 … at first blush, is a bit concerning,” he said.

But Smith also said the timeline makes sense because enforcing traffic rules is a provincial responsibility.

“We feel that this gap between the regulations being discussed and being implemented is important to give the provinces time to look at their legislation.”

The Herold family has filed a lawsuit that, among other things, seeks a declaration that all buses carrying sports teams in Saskatchewan be equipped with seatbelts and other safety devices.

Herold said the upcoming regulation is a good start, but he wants to know how authorities will make sure passengers actually wear them.

“You make it a law. You announce it when you get on the bus that seatbelts are required,” he said, comparing it to how everyone must buckle up on airplanes.

Herold suggested law enforcement officials could pull over buses to check that everyone was wearing seatbelts. Or belts could light up when buckled, making it visible to a driver that everyone was properly strapped in.

“I’m sure it can be enforced.”