Snow, high winds and low visibility made travel extremely dangerous in parts of Manitoba and eastern Saskatchewan Tuesday as a blizzard howled through the region for a second day. 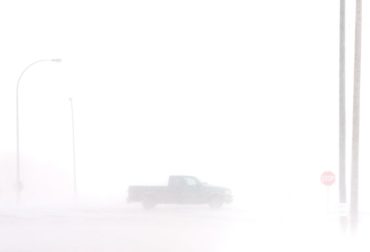 A truck leaves Regina on the Trans-Canada Highway during a blizzard on Monday, March 6, 2017. THE CANADIAN PRESS/Mark Taylor.

Manitoba said the Trans-Canada Highway and highways 16, 5 and 45 were closed from the Saskatchewan boundary to past Brandon, Minnedosa and Dauphin.

The storm knocked out power to thousands of customers in southwest Manitoba and stranded dozens of motorists.

“A lot of cars, the two lanes are totally in gridlock,” a motorist named J.P. told radio station CKLQ Tuesday from his car on the Trans-Canada Highway near Souris, Man.

Volunteers from the Rural Municipality of Whitehead used snowmobiles to shuttle 63 stranded motorists to a community school west of Brandon so they could warm up and have a meal.

A grader operator also managed to plow through deep drifts to free some vehicles from the snow.

Reeve Heather Curle said there were warnings about the storm but it took some people by surprise. Curle said she is proud of how people in the area responded despite the blizzard conditions.

“It is still blowing like crazy and there is zero visibility,” Curle said Tuesday.

Aaaaand it's a #blizzard. The weather this year so far has been a roller coaster of emotion. #Saskatchewan #saskag #sk #yick @WeatherSask pic.twitter.com/lfPWUHdI8l

“I think it is just typical of Manitoba communities to pull together and help everybody out.”

The storm prompted some school divisions in Manitoba to shut down or cancel school bus service.

In Saskatchewan, the provincial government said travel was not recommended on parts of the Trans-Canada Highway and other roads east of Regina. The bad weather also caused some flights to be cancelled or delayed at the Regina International Airport.

Environment Canada said blizzard warnings remained in effect for some areas but the conditions were to improve overnight and into Wednesday.

Unexpected stopover in Virden, MB due to the blizzard! Highways are closed… be safe if you're travelling friends ❤️#manitoba #storm pic.twitter.com/wdCVvqPufp

Alot of highways closures in our area. If u don't have to travel, pls don't. #ManitobaBlizzard #Staysafe pic.twitter.com/2BuuPjAXeH