BURLINGTON, Wis. – Flooding in the Midwest closed roadways and knocked out power to thousands, including a suburban Chicago hospital that was forced to close, but residents in the Wisconsin city of Burlington appeared upbeat even as portions of streets remained submerged by water Thursday. 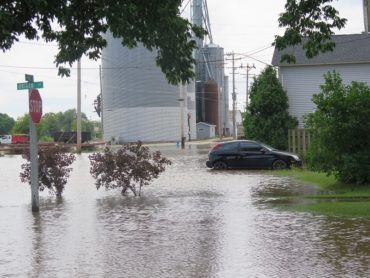 Parts of the streets are still submerged by Wednesday’s flooding in Burlington, Wis., Thursday, July 13, 2017. Flooding in the Midwest closed roadways and knocked out power to thousands, including a suburban Chicago hospital that was forced to close, but residents in the Wisconsin city of Burlington appeared upbeat even as portions of streets remained submerged by water Thursday. (AP Photo/Ivan Moreno)

Four bridges over the swollen Fox River in Burlington remained closed because the waterway is 5 feet above flood stage and almost every business in the city was waiting for power to be restored. Authorities there said nearly everyone is dealing with some type of flood damage in the city of about 10,000.

Police Chief Mark Anderson called the flooding “unprecedented” but local officials and residents were grateful only properties were damaged.

“I’m the happiest person in the world,” said Duane Hoerneman, 72, a lifelong Burlington resident. “Because my children are safe and because all of us are safe. It makes all the difference in the world at this point and we thank everyone for their support.”

Gov. Scott Walker on Thursday declared a state of emergency in Kenosha, Racine, and Walworth counties because of widespread flooding. About 100 Wisconsin National Guard soldiers are in the city to help local officials with traffic control and going door-to-door to check on people. The Wisconsin Department of Corrections is also sending about 20 inmates from the Robert Ellsworth Correctional Center to help with sandbagging.

U.S. House Speaker Paul Ryan, who represents Wisconsin’s 1st Congressional District, toured Burlington and other affected areas on Thursday. At a news conference, the Republican said he was impressed with how the community came together and praised the work of the first responders.

“This happened so fast … it’s a real blessing that we did not have the kind of loss of life or injury that could have happened,” Ryan said. He added that officials remain in the assessment stage.

Record flooding is occurring in Burlington right now. This is from #NewsChopper12 pic.twitter.com/BGsW5vil1c

Although flooding was widespread, it wasn’t severe enough to warrant a large number of evacuations. Tod Pritchard at the Wisconsin Emergency Operations Center said the only evacuations he’s aware of happened Wednesday at a trailer park in Kenosha County. He said it’s possible some people may have “self-evacuated.”

In suburban Chicago, Lake Forest Hospital’s clinical operations were still shut down Thursday, according to a statement from Northwestern Medicine. The statement said power at the hospital had been restored Wednesday night after the outage earlier that day. According to the statement, 70 patients were transported to Northwestern Memorial Hospital and other local facilities.

Lake County was among parts of Illinois hit hard by flooding. Earlier Wednesday, Mundelein firefighters and police officers evacuated about 25 people from an apartment building. Some senior citizens were taken away on small boats.

Wisconsin Republican House Speaker Robin Vos, who lives in the area and owns a factory in Burlington, said the flooding Wednesday came swiftly.

“Literally by the minute water was rising by inches,” he said. “But the fact that overall, while we’ve had extensive damage, nobody’s lost their life and nobody’s been harmed other than personal property. I think that’s a big victory.”

Vos said his factory is without power so his workers have the day off. He said his basement had some flooding.

These pictures of the river outside my office building were taken about 3 hours apart, and it's not done rising. #Burlington #flooding pic.twitter.com/98xmEuElKk

Because a We Energies substation is submerged in floodwater, thousands of people in the area without power may not have electricity restored until Friday afternoon.

Bob Koldeway, who owns a bicycle shop called Bob’s Pedal Pusher, said water entered through every door of his business and covered his floor.

“It was just a big inconvenience and this is the time of year when people want their bikes,” he said, taking a break from wiping the floor with a washcloth after power-washing it. He considered himself lucky that none of his bikes were damaged.

“If (the water) would’ve been higher we would’ve lost a lot of product,” he said. “But I had everything off the floor and you just gotta have faith that you got good friends and family and stuff to give you a hand.”

Unbelievable flooding in Burlington… Power is out… It's a real mess. @CBS58 @cbs58weather pic.twitter.com/wMNzj9jytJ

Here's some flooding in Burlington. Gonna be a thread. Here the water is almost up to Milwaukee ave bridge. Dam almost totally underwater. pic.twitter.com/CeS1Afg5Du

Flooding in Illinois leave fish flapping on the street
https://t.co/bTDr5H0m3e