The fastening system of a wooden platform connecting the gangway of a passenger vessel to a dock had not been inspected since it was first installed five years ago, the Transportation Safety Board of Canada said Wednesday in an information letter arising from an accident in September.

On September 7, the passenger vessel Fjord Saguenay II was docked at the marina in Sainte-Rose-du-Nord, on the Saguenay River about 200 kilometers north of Quebec City.

“The platform and access gangway connecting the dock and the floating pontoons collapsed while passengers were circulating on or near these installations,” wrote Marc-André Poisson, TSB’s director of investigations – marine in a letter to Sainte-Rose-du-Nord Mayor Laurent Thibault. 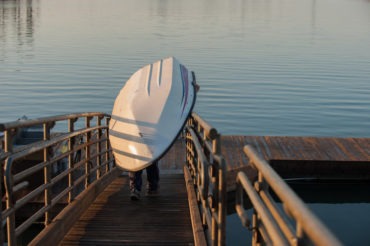 “According to the information gathered during the TSB investigation, the piece of treated wood holding the lag screws was in poor condition and, as a result, the lag screws tore free from their foundation,” Poisson wrote in the letter, published Wednesday on the TSB website.

“The investigation revealed that the platform connecting the gangway to the dock had been fastened with lag screws to a piece of treated lumber, which was affixed to the dock with bolts,” Poisson wrote. “The piece of treated lumber holding the lag screws was in poor condition and, as a result, the screws were torn from their footings. No periodic maintenance or inspection of the platform or fastening system had been performed since it was first installed in 2011.”

Poisson added that a copy of the letter was sent to the Fédération québécoise des municipalités, the Union des municipalités du Québec, the Ordre des ingénieurs du Québec and the Federation of Canadian Municipalities in order “to raise their awareness of the risks of such installations.”

It also publishes recommendations and a watch list of safety issues that TSB says “need to be addressed.”

One safety issue for the marine sector is a lack of mandatory safety management systems for all companies.

“Safety management systems have not yet been mandated in all sectors of the transportation industry,” TSB chair Kathy Fox stated Oct. 31 when it published its latest watch list.

In an investigation report released in 2004, TSB recommended that Transport Canada “take steps to ensure that small passenger vessel enterprises have a safety management system.”

That report was on the June, 2002 sinking of the Lady Duck amphibious passenger vehicle in the Ottawa River. Four passengers drowned.

In March, 2013, Transport Canada “advised TSB that the proposed Safety Management Regulations would not be applied to vessels less than 24 m in length and carrying fewer than 12 passengers,” TSB stated on its website.

“TC indicated that the financial burden of implementing a safety management system would be ‘too onerous for small companies with limited personnel’ and that there are a limited number of qualified organizations that could audit and certify SMS for marine companies,” TSB stated. “Although TC indicated that it will promote SMS as a best practice for vessels less than 24m, it will not require SMS, inspect it or audit it.