Preparing for the new work normal? Don’t move too quickly…

Deciding to shift your workforce to be more weighted towards a work-from-home environment isn’t as easy as flicking a switch for brokerages and insurance companies, P&C experts on a recent web panel warned.

There needs to be real thought put into it, as the future normal hasn’t quite been sorted out yet. For example, companies in various industries are looking to downsize their office footprint — some have already terminated leases and sold off office buildings in an effort to be completely virtual. That may be a premature move at this point, according to David Perez, chief underwriting officer of global risk solutions North America at Liberty Mutual Insurance.

“Even their headquarters,” he reported. “They’re telling people they can stay home forever. But in the end, I don’t know how it’s going to really settle out.”

Sure, it saves money, he said during the session entitled Working from Home, Forever: A View from the Top at the virtual Casualty Insights Conference, hosted by Advisen. But companies can’t be too hasty.

“I think it’s important to just take a step back and realize no one knows what the new normal is going to look like,” Perez said.

If players in the property and casualty insurance industry want to follow suit, his advice is to slow down and think things through before rushing to judgment. There are many issues to settle as a new normal at work eventually dawns.

“I don’t know where this will finally end up but there are some things that are going to manifest that I think the industry has to address to really make a full commitment towards working at home,” he said. 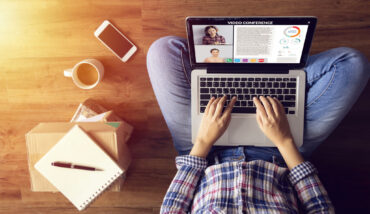 Take, for example, issues around feelings of isolation that some are having during the COVID-19 pandemic. “We know that people feel isolated and that they’re having some anxiety and some issues that are problematic,” Perez said. “We know that, historically, people working from home have been promoted less than people working in the office, so that has to be addressed.”

He further argued that the hard market has helped the insurance industry operate in an efficient manner. “But if this was a completely soft market, I don’t know if we would have been as successful or we would have to change how we do business,” Perez said. “So, a lot of uncertainty is out there.”

At the same time, companies can’t ignore the benefits employees are seeing, like avoiding long commutes and being able to be home more with their family. “There are a lot of positives. But things have to work out and flesh out fully before we know where we stand,” Perez said.

One way to help make remote working successful is to ensure corporate culture is maintained and people’s spirits stay up. That can be done by ensuring staff are taking the right number of breaks throughout the day.

“It’s very, very difficult now. It was difficult to break away when we just used our cell phones. Now that we’re completely work-from-home, get away. Take a break. If you’re sick, take a sick day. Make sure that you do the things you do to kind of give yourself space normally,” Perez said.

“These are things that we learned along the way,” he later added. “There’s just been a lot of different positives and negatives associated with this. In the end, we have to make sure the people that are [going to work for us] are maintaining their health and their mental health more than anything throughout this process.”

Fellow panellist Chris Kopser, president of global risk management at AXA XL, told a story about how colleagues became so used to having weekly meetings together that they became concerned when the meetings — which were set up to only take place for a finite amount of time — fell off the calendar.

“People really look for that, to Dave’s point about that connectivity, that engagement,” he observed. “How do you balance your life? We literally talk about [how] you have to hard schedule in breaks [and] take that time and just block your calendar. Go for a walk. Whatever you need to do just to maintain some semblance of balance.”