The government of Alberta has introduced a new website and updated mobile app to help “keep Albertans informed and allow municipalities to respond faster and more efficiently if conditions change.” 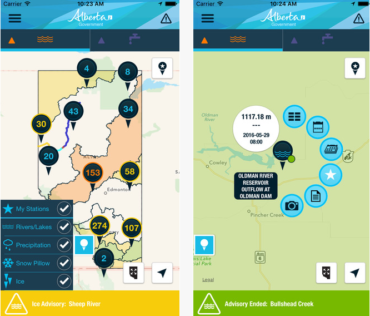 Although Alberta Environment and Parks (AEP) noted in a press release on Friday that warm spring temperatures, an early snowpack melt and slightly above-average precipitation levels in May have resulted in average-to-below average river flows this season, “it is important to note that intense rainfall can change river conditions quickly.”

Snowpack and soil moisture levels are two of the factors used to assess flood potential.

Tracking river conditions and the effect heavy rainfall may have on river basins in the province is vital, AEP said in the release, noting that “Albertans have expressed their interest in being provided with access to crucial information that will keep them informed of changing situations in river basins at home and across the province.” 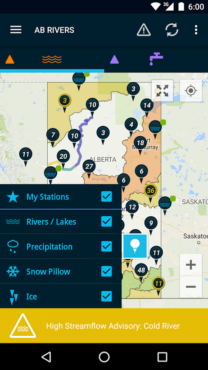 Key features of the new web portal for municipal emergency managers include:

The province has launched version 3.0 of the Alberta Rivers mobile app and the new website, which includes an online web portal for municipal emergency management personnel that will help keep communities safe, minimize the impacts of future floods and adapt to a changing climate, the release said.

The app enables advisories to be sent directly to a user’s mobile device via a push notification and provides detailed information on river flows, lake levels, precipitation, snowpack and ice conditions across the province, updated hourly. Version 3.0 also includes low-flow alarms to serve an increasing number of users wishing to use the app to monitor river conditions during dry periods.

The website is modelled after the popular mobile app and is very similar in layout and functionality, although push notifications are available only through the mobile app.

“Nearly three years on, Calgarians remember how our community and resilience was tested by the floods of 2013,” Calgary Mayor Naheed Nenshi said in the release. “Since then, we’ve done much to protect Calgarians from future flooding. The launch of the updated Alberta Rivers mobile application and the new rivers.alberta.ca website is another good step forward by giving citizens and emergency managers much-needed advance warning of possible flooding. These tools will improve public safety and our emergency response times. This Government of Alberta project is an investment in the protection and resiliency of our community.”

Tom Sampson, chief of the Calgary Emergency Management Agency, noted that “every flood is different and our actions leading up to and during a flood depend on the specifics of each event. The rivers.alberta.ca website and Alberta Rivers app are valuable tools that will help guide future flood responses while ensuring improved co-ordination and communication between citizens, municipal partners and the province.”