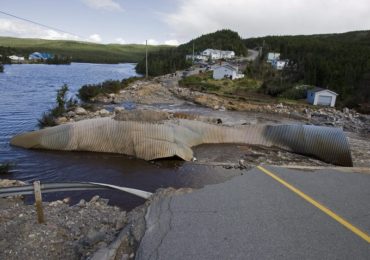 The road through Trouty, Newfoundland and Labrador seen on Friday, Sept. 24, 2010 was washed away by a raging river flooded by hurricane Igor.THE CANADIAN PRESS/Andrew Vaughan

The paper, titled Communicating hurricane risk in Eastern Canada: Enhancing the communication lines between the Canadian Hurricane Centre, municipalities and insurers, included six recommendations, four for government agencies and two for the insurance industry. It was released on Thursday.

The report noted that by and large, hurricane forecasts and severe weather forecasts more broadly, are sophisticated communiqués. Some of the characteristics are communicated in relatable, intuitive units (such as wind speed and rainfall amounts), familiar even to those lacking a background in meteorology and forecasting science. “However, other storm characteristics, most notably pressure and storm surge, are critical hurricane characteristics that influence response, and disaster planning, but are presented in units unfamiliar to those without a strong background in weather forecast interpretation,” the report suggested.

Furthermore, emergency management professionals may lack the experience and background to both understand these forecast parameters and place them into current and historical context. But the CHC offers voluntary weather interpretation courses to emergency management personnel at the provincial and municipal level one to three times a year.

Another finding in the report was that although most of the information that insurance companies are looking for in a hurricane warning is presented in CHC bulletins, “it appears that companies currently identify the media over the Canadian Hurricane Centre as their main source of information before a storm.” One of the things that could help alleviate this is training, said Glenn McGillivray, managing director of the ICLR.

“Insurers, municipal emergency managers and others may rely more on the media because the information obtained may be less technical and easier to understand,” McGillivray suggested to Canadian Underwriter. “If more insurance professionals and municipal government employees were to take the Canadian Hurricane Centre’s course in interpreting severe weather and hurricanes, we might see more of these people rely directly on information from the CHC over the news media,” he said, adding that ICLR may look into aiding the CHC in getting more people trained.

Initial hurricane warning systems – linear communication, where information would be transmitted by forecasters to emergency managers and then forwarded to broadcast meteorologists – are now a thing of the past. “Owing to the emergence and ubiquitousness of new communication technologies (i.e. smartphones) and platforms (i.e. social media), and the presence of a larger number of stakeholders now involved in public warning systems… emergency communication has evolved dramatically in recent years,” the report noted.

“Protocols are out the window, and communication is now disseminated in many directions, to many groups, all simultaneously,” McGillivray said. “The days of tuning into the nightly news, lead by the venerable and trusted anchor, are gone. This leads to many challenges, not the least of which is the question of who to trust for your information. We felt it was important to look at CHC forecasts and communication to determine how they were standing up in this brave new world and how things could be improved, if they needed to be.”

The report’s six recommendations were derived from a series of interviews with emergency management professionals and New Brunswick and a survey of the Canadian insurance industry. Besides the government-centric consideration of mandatory hurricane interpretation training, the report recommended:

The report also identified three areas that could benefit from additional research: (1) jurisdictional complications and their relation to weather forecasting and emergency response; (2) demographic trends in the Atlantic region; and (3) warning fatigue (the potential for the public to become immune to weather warnings).

Communicating hurricane risk in Eastern Canada was written by principal investigator Paul Kovacs, executive director of the ICLR, with help from research assistants Sophie Guilbault, ICLR’s manager of partnership development and Brian Pentz, a PhD student in the Department of Physical and Environmental Sciences at the University of Toronto.