HALIFAX – Most of Nova Scotia, Prince Edward Island and Newfoundland are being pounded by heavy snow and high winds Monday, creating whiteout conditions in many areas.

The storm moved into the Maritimes overnight heading west to east and is forecast to continue into Newfoundland and western Nova Scotia later in the day. Environment Canada has posted winter storm warnings for much of the East Coast.

Agency meteorologist Samantha Roch said Nova Scotia had received 25 to 35 centimetres of snow by 4 a.m. with another 10 to 15 centimetres expected in central and northern areas of the province. She said eastern Nova Scotia and Cape Breton can expect another 20 to 30 centimetres before the snow tapers off by early afternoon.

P.E.I. had received about 20 centimetres, and Roch said the province could expect another 10 before the snow stops falling later in the day.

With powerful winds gusting up to 80 kilometres an hour, Roch said blowing snow was reducing visibility to near zero in many areas, creating hazardous driving conditions. 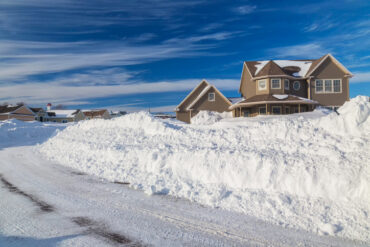 Much of Newfoundland has also been hit with winter storm and snowfall warnings. Environment Canada said some parts of the island could get anywhere from 20 to 35 centimetres of snow and winds are expected to reach up to 100 kilometeres an hour.

Snowy conditions could last until Tuesday in some parts of Newfoundland, the agency said.

Provincial government offices in Nova Scotia were closed Monday because of the heavy snowfall. The city of Halifax closed public transit services early, at 7 p.m., on Sunday evening. Bus service in that city will be delayed until at least noon Monday.

Most health facilities in Nova Scotia are open despite the storm, but some COVID-19 assessment centres are closed for the day or have delayed their opening. All Halifax Regional Centre for Education schools are closed as well as Dalhousie University’s Halifax and Truro campuses and St. Mary’s University.

In P. E. I, classes in the province’s Public School Branch were called off Monday. Several schools in the Newfoundland and Labrador English School District, including those in the metro St. John’s area, are also closed.

And due to the adverse weather across the Cabot Strait, Marine Atlantic has cancelled its day trips from North Sydney to Port aux Basques.