For the second year in a row, hail in Texas in March has cost The Allstate Corp. millions of dollars in claims and claims expenses. 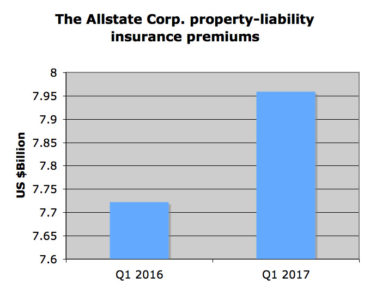 Northbrook, Ill.-based Allstate released May 2 its financial results for the first three months of 2017, reporting a combined ratio on property-liability of 93.6% in the most recent quarter, a 4.8-point improvement from 98.4% in the first quarter of 2016.

“Among the hardest-hit areas included Texas, Oklahoma and Kansas after up to softball-sized hail left homes, vehicles, and business with shattered windows and dented roofs,” Impact Forecasting reported in April. The Insurance Council of Texas cited insurable losses of $300 million “for the March 26 storms alone,” Impact Forecasting added.

In its Q1 2016 financial report, Allstate reported 64.8% ($536 million) of its claims and claims expenses from catastrophes were from two events, one of which cost $340 million and the other costing $196 million. 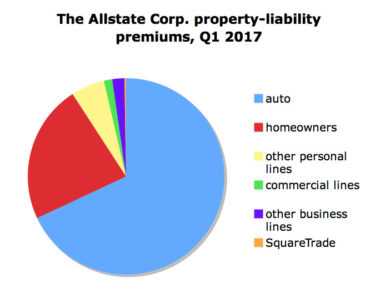 In April, 2016, Allstate reported that “two severe hail events, primarily impacting the state of Texas in March, accounted for two-thirds of the catastrophe losses” for Q1 2016.

Also for the latest quarter, Allstate reported $59 million on premiums from SquareTrade, a San Francisco-based firm that writes protection – from malfunctions and accidental damage – for consumer electronics.

Allstate announced Nov. 28, 2016 that it agreed to acquire SquareTrade for about $1.4 billion from a group of shareholders including Bain Capital Private Equity and Bain Capital Ventures. SquareTrade has relationships with retailers including Amazon, Costco, Sam’s Club, Target, Staples, Office Depot and Toys R Us.