Berkshire Hathaway Inc. announced Friday it recorded insurance premiums earned of $21.7 billion during the three months ending March 31 – up 95% from $11.1 billion in Q1 2016 -while Cyclone Debbie affected the Omaha, Neb.-based firm’s underwriting result by more than $100 million in the most recent quarter. All figures are in United States dollars. 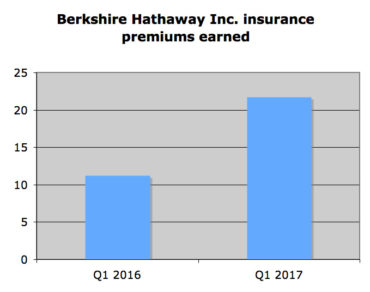 “NICO is assuming 80% of the net losses and net allocated loss adjustment expenses on the subject reserves in excess of the first $25 billion and NICO’s overall limit of liability under the agreement is $20 billion,” AIG added.

For the first three months of 2017, Berkshire Hathaway reported retroactive reinsurance premiums written of $10.185 billion, compared to $580 million during the same period in 2016. 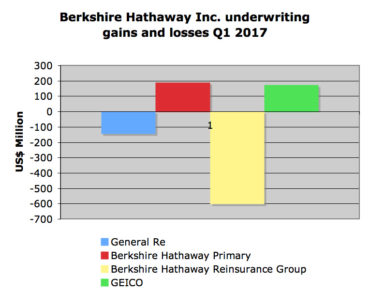 In its annual report for 2015, AIG said a “significant portion” of its non-life reserves was for “the U.S. commercial casualty class, including excess casualty, asbestos and environmental.”

Berkshire Hathaway’s other major reinsurance operation is General Re, which does business through 13 branch offices in the U.S. and Canada. 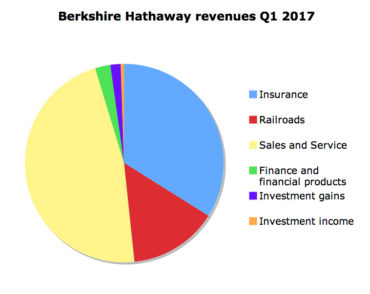 About $270 million of Berkshire Hathaway Reinsurance Group’s Q1 2017 underwriting loss was “related to prior years’ loss events,” the company said, adding that $52 million was from a Cyclone in Australia. 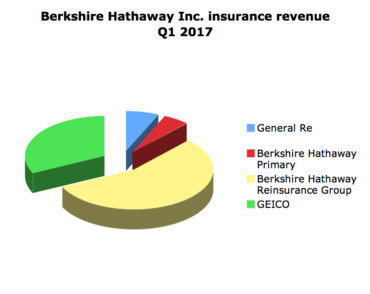 In addition to the $52 million in losses to Berkshire Hathaway Reinsurance Group, Berkshire Hathaway also said May 5 that General Re’s Q1 2017 losses “included $50 million in estimated losses from a cyclone in Australia in March 2017.” Also in the most recent quarter, General Re increased its “estimated for unpaid losses by $142 million” for certain liability business written in previous years in Britain. That resulted from a reduction in the Ogden Rate from plus 2.5% to negative 0.7%. Markel Corp. reported earlier that the Ogden rate – unchanged from 2001 through March 20, 2017 – is used to calculate lump sum awards in bodily injury cases in Britain.