Q2 combined ratio improves 13.3 points to 101% for The Co-operators

Co-operators General Insurance Company reported Thursday an underwriting loss of $6.6 million in the three months ending June 30, while direct premiums written were $768.7 million, up 6.4% from $722.6 million in Q2 2016. 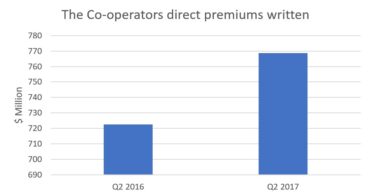 During the second quarter of 2016, Guelph, Ont.-based The Co-operators reported an underwriting loss of $82.3 million, after the wildfire affecting Fort McMurray, Alberta gave rise to the most expensive natural catastrophe in Canadian history.

“Excluding the impacts of this catastrophic event, our underwriting results deteriorated by $30.0 million,” from Q2 2016 to the most recent quarter, The Co-operators said in a release. “This was driven by an increase in the frequency of current accident year claims across all lines of business, primarily the result of multiple storms in the West and Ontario, and an increase in severity of home accident year claims, partially offset by continued policy growth across all lines of business.”

Its “capital position remains strong, as the Minimum Capital Test for Co-operators General was 223% at June 30, 2017, well above the internal and regulatory minimum requirements,” The Co-operators said in a press release.

“Excluding the reinsurance reinstatement premiums included in 2016, the home line of business remained our largest contributor to NEP growth.”

Excluding the impact the Alberta wildfire in 2016, the loss ratio in home deteriorated by 13.5 points from Q2 2016 to the most recent quarter, The Co-operators reported.

“This was primarily a result of multiple storms in the West and Ontario, compared to less severe weather in the same period of the prior year, combined with an increase in the severity of current accident year claims.”