MONTREAL – Automakers are expressing concern that it will be difficult to comply with a new law in Quebec that requires them to sell a minimum number of electric, plug-in hybrid and hydrogen fuel-cell vehicles. 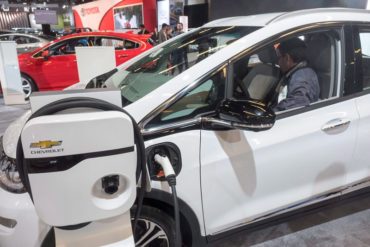 A Chevrolet Bolt electric car is seen during media day at the Montreal International Auto Show Thursday, January 19, 2017 in Montreal. Automakers are expressing concern that it will be difficult to comply with a new law in Quebec that requires them to sell a minimum number of electric, plug-in hybrid and hydrogen fuel-cell vehicles.THE CANADIAN PRESS/Paul Chiasson

Starting with the 2018 model year, 3.5 per cent of all auto sales in the province will have to be from those types of vehicles. That threshold will rise to 15.5 per cent for 2025 models. Quebec is the only province that has such legislation.

Companies that don’t meet that threshold will have to buy credits from other automakers that do. It’s unclear what penalties automakers would face if they violate the law, as regulations that would define that have not been released.

“It’s going to be a real challenge to see how we’re going to find a path to get there.”

The legislation, which was passed last October, should be delayed, Adams said, adding that the auto industry should be recognized for its efforts to cut emissions through the development of hybrid vehicles as well as fuel efficiency improvements with its non-electric fleet.

Adams said some carmakers may simply reduce the supply of non-electric vehicles on their lots in order to abide by the law, a move that could hurt sales.

Quebec’s environment minister didn’t respond to requests for comment about the industry’s concerns. Officials instead pointed to the Environment Department’s website, which says the goal behind the law is to increase consumer choice.

While sales of electric vehicles have grown, they still account for less than one per cent of overall new auto sales in Quebec. Across Canada, they make up 0.5 per cent of all auto sales.

“I don’t think that it’s realistic to impose that kind of mandate on consumers who ultimately are going to decide what they want to purchase based on their own needs,” said Michael Hatch, chief economist of the Canadian Automobile Dealers Association.

George Saratlic, a spokesman for General Motors, said there is no “silver bullet” that would increase sales of low- or no-emission vehicles as consumer demand is driven by factors such as technology, price and the availability of charging stations.

“If you look at places like Ontario and B.C., electric vehicle adoption is growing there as well as sales and its doesn’t need legislation,” he said.

Not all auto manufacturers have reservations about Quebec’s law.

The full-electric Leaf accounted for 2.4 per cent of Nissan’s sales in Quebec last year, Paiva said. The automaker is also expected to build credits from sales of 2014 to 2017 model years to help meet the government thresholds, which the law allows for.

Mazda does not yet sell a vehicle that meets the law’s requirements, but the automaker is planning to launch an electric vehicle in 2019, said spokeswoman Sandra Lemaitre.

The company has been paying credits in California, which has a law similar to Quebec’s, and expects to have to do the same initially in Quebec, Lemaitre said.

“It will be challenging for us to get caught up but we will get there,” she said.