Reduced market access, regulatory fragmentation, the return of inflation, cloud risk accumulation and emerging liability legislation for artificial intelligence are just some of the key risks for the re/insurance industry, according to Swiss Re’s 2017 SONAR report.

The report, released on Tuesday, is based on “the SONAR process, a crowdsourcing tool drawing on Swiss Re’s unique internal risk management expertise to pick up early signals of what lies beyond the horizon,” the reinsurer said in a statement.

Swiss Re said the “six top risks with the highest potential impact” are: 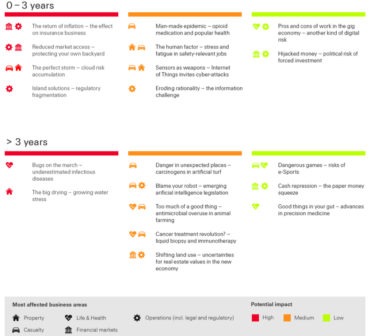 “Ignoring emerging risks is not an option, neither for political decision-makers, the insurance industry, nor society as a whole,” said Patrick Raaflaub, Swiss Re Group’s chief risk officer, in the statement. “The earlier we adapt to these changes, the better prepared we will be. Sharing knowledge through a proactive risk dialogue across stakeholders can help the insurance industry create a proactive and pre-emptive risk management culture that enables disciplined risk-taking. That is an important step to help society as a whole to become more resilient,” he argued.

The identified risks are relevant to life and non-life insurance areas, as well as asset management, Swiss Re explained. They are presented with the goal of helping industry players prepare for new scenarios by adapting their behaviour, market conduct and product portfolios.