Return to the office: What these insurance executives say

With the pandemic entering its 11th month, industry leaders are hearing from workers who want more flexibility as to where they work.

“We’ve got the majority of [workers] telling us, ‘We would like to spend some time in the office, we like being productive at home … and we like that freedom. Is there a way that we can have a bit of both? Have a bit of remote working and a bit of time in the office?’” said Carol Jardine, president of Canadian operations at Wawanesa Mutual Insurance, on Monday during a Canadian Underwriter webinar.

For its part, CAA Insurance does not anticipate having more than 50% of its workers back in the office at least until after the third quarter of 2021, said Matthew Turak, group president of insurance at CAA Club Group. 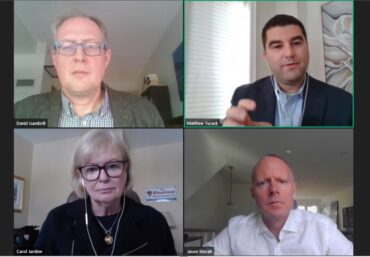 “Wearing masks will be part of our future. I don’t think masks are going away any time soon. Although I would love them to go away, personally, I do think they will be around for a while as vaccinations and herd immunity and everything starts rolling out,” Turack said during the webinar, Canada’s P&C Industry in a Post-COVID World.

Panellists were asked about a recent Canadian Underwriter survey in which 71% of respondents said they were either satisfied or very satisfied with working from home.

But Wawanesa employees – about 90% of whom are now working from home – are also saying the insurer is doing the right thing in keeping workers safe as a precaution against the spread of COVID-19.

Jason Storah, CEO at Aviva Canada, observed that the company took the position early on in the pandemic that the company would trust its employees. He said the company encouraged its employees who were working from home to make sure their families were looked after first, so that they would have peace of mind to excel in their work.

“One of the nice things about COVID is that we have taken the view of trusting our employees,” Storah said. “Given the stresses of dealing with home schooling or looking after family members and their lives being upside-down, [we’ve taken the] approach of saying to employees, ‘Look, we know you have a lot going on. Get your personal life sorted out, and work will still be there. If you need help, we’ll make it work. Just reach out.’

Storah noted that “hundreds” of Aviva employees pivoted into different roles early on last year. “Auto claims adjusters early on weren’t that busy, but there were a lot of people in billing and endorsements, and broker services who were really busy, so we moved people around,” he said, adding that technology made it easier for people within the company to communicate with each other. “I think those are some of the things you will see going forward. Like everything in life, I hope things will come down to a better balance in the future.”

The overall approach is one of offering workplace flexibility, Storah said. He sees this as the future for the P&C workplace in a post-COVID environment as well.

“I don’t think the office is dead,” he said. “I just think it’s going to evolve.”