Global advisory, broking and solutions company Willis Towers Watson (WTW) has announced its financial results for the third quarter of 2016 ending Sept. 30, reporting total revenues of US$1.78 billion, an increase of 2% (5% constant currency increase, 1% organic increase) from US$1.75 billion in the same period in the prior year. 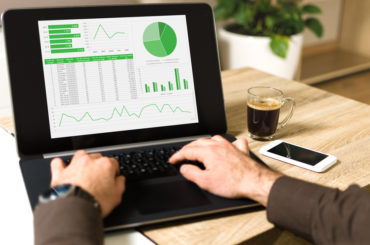 Total revenues were US$5.96 billion for the nine months ending Sept. 30, an increase of 7% (10% constant currency increase, 1% organic increase) as compared to Willis and Towers Watson pro forma revenues of US$5.57 billion for the same period in the prior year.

By segment, Human Capital & Benefits (HCB) had commissions and fees of US$747 million, an increase of 2% (5% constant currency increase and 2% organic increase) from pro forma US$736 million in the prior-year third quarter. Retirement revenues were up slightly as the work associated with U.S. Bulk Lump Sum and pension administration projects increased, WTW said in the release. The Talent and Rewards business saw growth as a result of an increase of executive compensation projects across all regions and the successful delivery of global data surveys. Healthcare consulting continued to see solid growth, led by success in the large client market. The Technology and Administration Great Britain business had growth driven by new administration clients and project activity. The HCB segment had total revenues of US$747 million, which includes interest and other income, the release said.

For the quarter, the Corporate Risk & Broking (CRB) segment had commissions and fees of US$546 million, an increase of 5% (8% constant currency increase and flat on an organic basis) from pro forma US$519 million in Q3 2015. The quarter’s reported and constant currency commissions and fees growth was driven by the acquisition of Gras Savoye, a broker in France, WTW reported. Great Britain led organic growth for the second quarter in a row as a result of strong growth in all lines of business. Western Europe also had strong organic growth primarily in large client accounts and energy. North America organic revenue declined slightly. International organic revenue declined primarily as a result of economic and political issues in Asia and Brazil. The CRB segment had total revenues of US$554 million, including interest and other income. 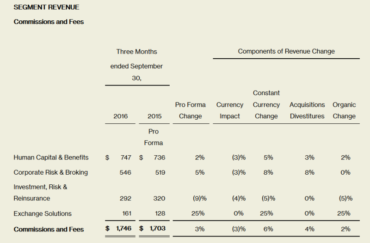 The Investment, Risk & Reinsurance segment had commissions and fees of US$292 million in Q3 2016, a decrease of 9% (5% constant currency decline and 5% organic decline) from pro forma US$320 million in Q3 2015. “The Wholesale, Risk Consulting and Investment revenue growth was more than offset primarily by a decline in Capital Markets, as transactions have slowed dramatically, and there has been softness in the North American Reinsurance market,” the release said. The Investment, Risk & Reinsurance segment had total revenues of US$299 million, including interest and other income.

For the quarter, the Exchange Solutions segment had commissions and fees of US$161 million, an increase of 25% (25% constant currency increase and 25% organic increase) from pro forma US$128 million in the prior-year third quarter. Retiree and Access Exchanges revenues increased by 35%, primarily as a result of the record 2016 annual enrollment season, WTW said in the release. Exchange Other revenues increased by 14%, primarily due to Technology and Administration Solutions adding new clients and experiencing higher project activity. The Exchange Solutions segment had total revenues of US$161 million, including interest and other income.

John Haley, WTW’s chief executive officer, said in the release that the company continues to deliver revenue growth, led by the acquisition of Gras Savoye and organically by the Exchange Solutions segment. “I am pleased with the progress against our integration plans, revenue synergy activities and our enhanced efforts to manage profit margin,” he said. “We expect to see strong earnings growth for 2016 and I remain very confident in achieving our long-term merger objectives.”