Risk solutions revenue up 1% at Aon

Aon plc reported a 1% increase in retail brokerage revenue for the three months ending June 30 compared to the same period in 2015.

London-based Aon released Friday its financial results for the second quarter. In risk solutions (which includes its retail brokerage and reinsurance brokerage), Aon reported revenue of $1.847 billion in the most recent quarter, up 1% from $1.833 billion in Q2 2015. All figures are in United States dollars. 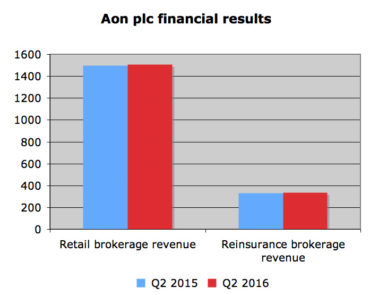 The 1% increase was “driven by 3% organic growth in commissions and fees, partially offset by a 2% unfavorable impact from foreign currency translation,” Aon reported.

The increase was “due primarily to growth in facultative placements, cedent demand in treaty placements, and new business generation, partially offset by an unfavorable market impact internationally,” Aon stated.

For risk solutions, Aon’s major offices are in Chicago (the corporate headquarters before the move to London in 2012) and New York City. Aon operates Toronto-based Aon Reed Stenhouse.

In addition to its retail and reinsurance brokerages, Aon also operates Aon Securities Inc., which underwrites insurance-linked securities, arranges for financing of insurers and provides advice on strategic and capital alternatives.

The 1% drop in revenue was “driven primarily by a 2% unfavorable impact from foreign currency translation and a 2% decrease in commissions and fees related to net divestitures, partially offset by 3% organic revenue growth,” Aon stated. 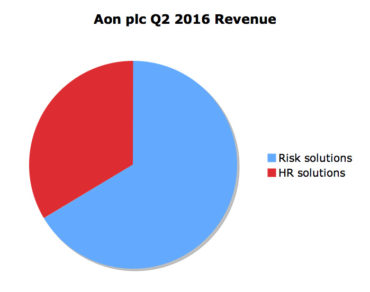 In June of 2015, Aon had paid $150 million due under an agreement to settle a lawsuit, Aon reported July 31, 2015, in its Q2 2015 financial report. Aon had placed property insurance for Northrop Grumman Corp. In 2005, Northrop Grumman’s shipbuilding facilities were damaged during Hurricane Katrina, which inundated much of New Orleans at the time.

“Northrop’s excess insurance carrier denied coverage for storm surge damage pursuant to a flood exclusion in the excess policy. Northrop sued that carrier but subsequently settled its claims,” Aon reported in 2015. Then in 2011, Northrop filed a lawsuit in California against an Aon subsidiary claiming “negligence, breach of contract and negligent misrepresentation in connection with the placement of Northrop’s property insurance program for the period covering 2005 and subsequently amended the complaint to add additional claims for intentional misrepresentation and concealment,” Aon added in 2015. “Northrop sought compensatory damages of approximately $340 million, which included prejudgment interest and attorneys’ fees, and punitive damages that were a multiple of the compensatory damages sought.”

In May, 2015, Aon entered a settlement agreement, under which Aon paid $150 million to Huntington Ingalls Industries Inc., Northrop’s successor in the lawsuit.