WINNIPEG – A severe storm that roared through southern Manitoba on Wednesday left considerable damage in its wake. 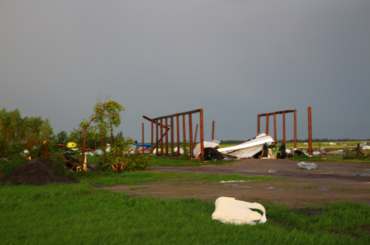 Roofs were lifted off some homes and buildings. Photo: @BaerChick.

Tornado warnings were issued across the region, and reports poured in on social media of trees being downed, intersections flooded and power being knocked out.

Environment Canada confirmed a tornado touched down on the Long Plain First Nation, near Portage la Prairie, and about 18 families were being put up at an emergency centre because of damage to their homes, though there were no injuries reported.

CTV Winnipeg reported that roofs had been lifted off some homes and at least one was completely gone.

Many reported seeing the sky over Winnipeg turn green before the city was hit with high winds, heavy rain and intense lightening.

The roof on one side of the Parkway Plaza condo building in Winnipeg was ripped off, drenching seven floors worth of condos with water and forcing some of the mostly elderly residents to evacuate, though there were no reports of injuries.

“We had to all go down, so we were told there’s damage,” said Josephine D’Andrea, a resident of the unaffected half of the building.

“It appears there is some structural damage above, and a fair amount of damage on the roof. The firefighters … are removing remaining parts of the roof that could fall and injure someone on the ground.”

The sky was so cool last night after the storm! I've never seen clouds like this. #Manitoba #MBStorm #ExploreMB pic.twitter.com/iv7lvyD0xs

In another part of the city, a shopping mall had to be evacuated due to a power outage.

On a Hutterite colony southwest of Portage la Prairie, and near the Long Plain First Nation, 20-year-old amateur photographer Rachelle Baer jumped into a truck with her father and headed out to get some shots of the storm.

When they got to the back of the New Rosedale colony, they saw a twister touching down in a grainfield.

They raced back home and Baer got on the colony’s public address system to warn people to take shelter.

“It was surreal to have a tornado come through here,” she said. “Nobody who lives here has ever seen anything like it. It felt like there was a hurricane outside.”

Among the pictures taken by Baer was one of a vacant trailer sat. In a second picture taken half an hour later, all that was left was debris and a bare patch of grass.

Vacant mobile home just gone. First two pictures are half hour before the storm hit, as it was rolling in. #mbstorm pic.twitter.com/58n7w0EqS8

She also posted pictures of damage to buildings on the colony’s commercial feedlot.

“It didn’t hit the centre of our colony where our homes are; it basically moved through the back southwest corner of the colony,” she said. “It did a lot of damage but we are very blessed that it didn’t hurt anyone.”

Baer said there will be a lot of cleanup to do.

“There is trash strewn everywhere. The fields are full of metal sheets and siding.”

The Weather Network posted a tweet reporting that winds at the Winnipeg airport had reached 98 kilometres an hour.

The storms come after several days of hot and humid weather in the region.

Parts of southern Saskatchewan were hit with similar weather on Tuesday night, with Environment Canada confirming a tornado had touched down near Davidson, Sask.

— with files from CTV Winnipeg

Path in the grain field where the tornado rolled a hay bale 100feet #mbstorm @NewRosedaleFeed pic.twitter.com/IRZtk2uOvC