A weather system that brought sub-freezing temperatures to South Carolina and Georgia, as well as heavy rains in Peru were among the catastrophes with economic losses exceeding $1 billion in March, Aon plc’s Impact Forecasting unit reported Friday in its Global Catastrophe Recap. 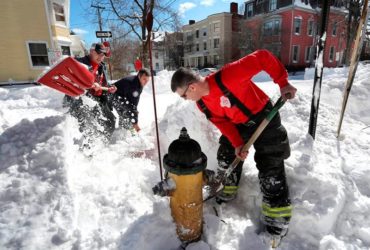 “Preliminary reports” indicate that crop losses resulting from a Nor’easter March 13-15, which brought sub-zero temperatures to the U.S. south, would be near $1 billion, Chicago-based Impact Forecasting said in the report. All figures are in U.S. dollars.

“Severe disruption to travel and transportation was reported, including more than 7,000 flight cancellations, as well as numerous school and business closures,” Impact Forecasting said of the mid-March Nor’easter.

There were two weather catastrophe events in Canada with insured and economic losses “well into the millions” in March.

On March 8, “a broad area of low pressure led to extremely gusty synoptic winds” in parts of Ontario, “leading to widespread damage and at least one fatality,” Impact Forecasting said. With winds gusting to 110 kph “it led to a high volume of reports of downed trees and power lines onto homes, businesses and vehicles throughout the province,” Impact Forecasting said. “At the peak of the event, nearly 70,000 customers in Ontario lost electricity.”

Three days later, in Newfoundland, “heavy snowfall and powerful wind gusts caused widespread and significant damage and disruption, particularly on the Avalon Peninsula where 70,000 homes and business were left without power,” Impact Forecasting said in the report.

Total economic losses of about $3.14 billion were reported in Peru, which experienced heavy rainfall in mid-March, causing major mudslides and river flooding.

“At least 120 people were left dead or missing from flooding that has been ongoing since January,” Impact Forecasting said of the Peruvian catastrophe. “An additional 353 people were injured. Local authorities cited that more than 245,000 homes and other structures had been damaged or destroyed across the country.”

In China, nearly 45,000 structures were damaged or destroyed after an earthquake measuring 5 on the Richter scale affected Yunnan province March 27. Total economic losses were listed at $50 million.

The following day, Cyclone Debbie made landfall in Queensland, Australia.

“Preliminary data from the Insurance Council of Australia cited 35,370 claims filed” with an estimated value of US$310 million.

“These totals were expected to rise in the coming weeks,” Impact Forecasting said, adding at least 10 people were killed as a result of Cyclone Debbie.

“Extensive wind-related damage was reported from the Whitsunday Islands and the towns of Bowen, Mackay, Proserpine, and Airlie Beach,” Impact Forecasting said. “However, the worst damage was incurred in southeastern Queensland and northern New South Wales where the storm’s remnants prompted torrential rainfall. Widespread severe flooding inundated several towns and communities and caused extensive damage to infrastructure and the agricultural sector economic cost will be even higher.”

“Widespread disruption due to falling trees and power lines was reported across the country,” according to the global catastrophe recap. “At least two people died and eleven were injured, while more than 600,000 households endured power outages.”