Sponsors completed one cat bond of about $600 million with coverage for Canada in Q1: PCS

Sponsors completed one catastrophe bond with coverage for Canada in the first quarter of 2017 (Galilei Re), according to Property Claim Services’ (PCS) first-quarter cat bond report released on Wednesday. 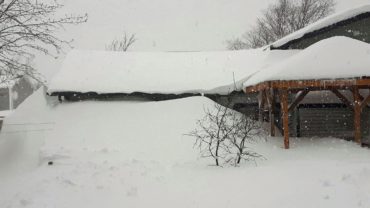 Snow is piled up in front of house in Gander, N.L. on Monday, April 3, 2017 in a handout photo. Parts of Newfoundland continue to be hammered by heavy, blowing snow for a second straight day. Environment Canada has issued several blizzard warnings and special weather statements for parts of the island. THE CANADIAN PRESS/HO-Trudy Carter

As it was a large transaction, capital raised by cat bonds that included cover for Canada fell only slightly year-over-year from $600 million in the first quarter of 2017, PCS said in the report, titled A Real Head-Scratcher: PCS Q1 2017 Catastrophe Bond Report. Galilei Re used the PCS Catastrophe Loss Index for both Canada and the United States.

Half the transactions were small (under US$200 million), and it took two large transactions of about $500 million to lift aggregate limit to a record-setting issuance of US$2.3 billion. “So, issuance was up a bit roughly the same year over year,” the report said. “But a lot of the players were different – even though they were different only for the first quarter.”

For Q1 2017 cat bond issuance, sponsors completed eight transactions – down a little from nine in the first quarter of 2016. Average transaction size climbed significantly (31%) to US$292 million due to the disproportionate effects of Galilei Re, Aozora Re and Sanders Re.

According to the report, seven of the eight cat bonds completed so far this year had exposure to North America. Galilei Re included Canada as well as Europe. One catastrophe bond with no North American exposure came to market, covering risks in Japan. Use of PCS data in first-quarter cat bond was consistent year over year, moving down slightly from US$950 million in 2016 to US$900 million this year. While Galilei Re used the PCS Catastrophe Loss Index, Sanders Re used a mix of industry loss index and indemnity with independent catastrophe definition (both by PCS).

The report noted that past issuances used only PCS loss estimates for personal auto and personal property. The 2017 transaction integrated more indemnity coverage with PCS cat event definition while still using the loss index for certain parts of the cover. Sanders Re was the only first quarter cat bond to use PCS for independent catastrophe designation. Last year, two transactions did, with aggregate limit of US$350 million, PCS noted.

The report also pointed out that sponsors completed three “cat bond lite” transactions in Q1 2017, while none were completed in the first quarter of 2016. The transactions ranged from US$5 million to US$63 million, with the total for the quarter reaching US$118 million. Two had indemnity triggers and one trigger was not disclosed. One, AlphaTerra, covered non-U.S. risk only (Brazil).

Looking at trends in the cat bond market right now, the report noted that it suggest a “dynamic market with the potential to mature based on the needs and interests of its participants.” As noted in the report, many first quarter “familiar faces” didn’t return to the cat bond market this year, and most transactions were smaller and from primary market sponsors, “in stark contrast to the past several years of first quarters, which featured more large retrocessional transactions and even large primary market issuance activity.” However, historically the second and fourth quarters are the busiest of the year, so it can be difficult to use the first quarter as a reference point for the rest of the year.

As well, sponsors completed five private transactions, two of them not categorized as cat bond lite in the report. The broadening use of private cat bonds (of which cat bond lite is a subset) suggests a continued interest in increased flexibility and frictional cost reduction, while still maintaining access to capacity from providers that have liquidity mandates.

The final trend relates to demand for new lines, as the insurance-linked securities (ILS) market demand for new risk areas remains significant. Conversations throughout the Jan. 1 renewal and after have emphasized the interest the ILS market has in lines such as global marine and energy, terror and cyber, among others, the report said. “The launch of PCS Global Marine and Energy should help satisfy this need by bringing more original risk to market, with subsequent loss aggregation solutions likely to help the market expand further,” PCS suggested.

In early April, PCS Global Marine and Energy was formally launched, PCS’ “first entry into the nonelemental large risk loss space” that will be followed by several other speciality lines loss aggregation solutions. Currently, PCS Global Marine and Energy has losses for 11 events going back to 2009, with efforts in progress to complete the historical database for this period. When PCS believes that an event is likely to cause more than US$250 million damage, it assigns a four-digit serial number at the event becomes a “PCS identified marine and energy event.”