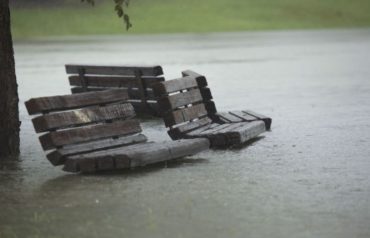 A stalled weather system and the remnants of Tropical Storm Julia have brought days of rain and localized flooding to the region.

The rain is expected to continue into Thursday. The U.S. Navy authorized a 2-hour delay Thursday morning for its non-essential personnel at military installations throughout the Hampton Roads region.

National Weather Service meteorologist Matt Scalora said late Wednesday afternoon that anywhere from 9 inches to 16 inches fell over the region during a 72-hour period. He added that the rainfall broke records for individual dates on Monday, Tuesday and Wednesday.

Forecasters predicted the heaviest of the rain would end by Wednesday evening. The rain is expected to continue for much of Thursday before Julia’s remnants drift out to sea by the following day.

Officials in Chowan County, North Carolina, reported on a website that at least two roads were washed out along with water lines serving 150 customers. Several others roads are impassable. Between five to 10 inches of rain has fallen there.

In Currituck County, Emergency Management Director Mary Beth Newns wrote in an email that several buildings had been flooded.

Incredible #rain has led to #flooding for coastal cities in Virginia! #VAwx pic.twitter.com/HdzGic192Y

Solomon lives in a flood-prone neighbourhood. He said water flooded his backyard up to his house’s foundation but failed to enter the home. He said his neighbourhood has fared pretty well, considering.

“A lot of parents were pretty surprised,” said Solomon who has a child in middle school. “The kids are pretty happy. They were texting, saying hey what are we going to do today? It was like summer or the weekend.”

Live updates on storm from @virginianpilot: https://t.co/23gZzLkG7L. More than 13 inches of rain have fallen in some areas of #HRVA