The number of major floods in natural rivers across Europe and North America has not increased overall during the past 80 years, rather the occurrence of major flooding in these two continents often varies with North Atlantic Ocean temperature patterns. 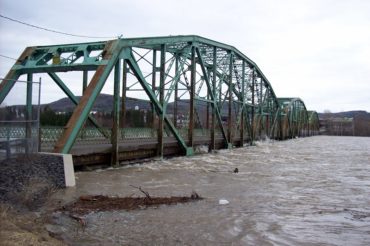 Understanding the forces that influence major floods can help inform the design of more resilient infrastructure. Image shows a major flood on the St. John River on the border of Maine, United States and New Brunswick, Canada, April 29, 2008. This site was part of the study. USGS Public Domain.

The study, titled Climate-driven variability in the occurrence of major floods across North America and Europe and published in the September issue of the Journal of Hydrology, found that the occurrence of major flooding in North America and Europe often varied due to Atlantic Multidecadal Oscillation (AMO). The National Oceanic and Atmospheric Administration describes AMO as “an ongoing series of long-duration changes in the sea surface temperature of the North Atlantic Ocean, with cool and warm phases that may last for 20-40 years at a time and a difference of about 1°F between extremes.”

“This study is unique in that it examined trends in major floods only – those with 25-year or longer return periods – that typically cause the most damage to infrastructure,” said U.S. Geological Survey (USGS) research hydrologist Glenn Hodgkins, who led an international team of scientists in the study. “We examined historical streamflow data from more than 1,200 diverse but minimally altered watersheds across two continents,” Hodgkins said in a press release last week.

Added co-author Paul Whitfield from the University of Saskatchewan: “We are fortunate that agencies in many countries had the foresight to establish reference hydrologic networks that provide the high quality long-term streamflow records that make this type of study possible.”

USGS said in the release that the study findings are consistent with the Intergovernmental Panel on Climate Change conclusion that “globally there is no clear and widespread evidence of changes over time in flood magnitude or frequency in observed flood records.” 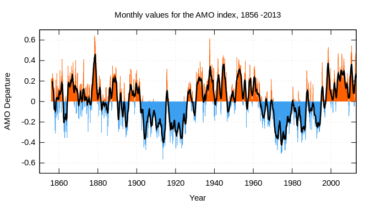 This study linked major flooding across Europe and North America to the Atlantic Multidecadal Oscillation — a natural pattern of warm and cool phases in North Atlantic sea-surface temperatures. We’ve been in a warm phase since the late-1990s. By Giorgiogp2 (Own work) [CC BY-SA 3.0 (http://creativecommons.org/licenses/by-sa/3.0)], via Wikimedia Commons.

The organization noted that a common assumption is that because warmer air holds more water, climate warming will cause more frequent and intense precipitation and therefore more major flooding. “However, flood generating processes are often more complex,” the release said. “Other factors influencing the magnitude of floods include snowmelt runoff and soil moisture prior to rain events. Significant trends over time in the number of major floods varied according to watershed size, location, climate region, flood threshold, and period of record, indicating that generalizations about flood trends across large areas or a diversity of watershed types are ungrounded.”

“Little research has been completed on the relation between major floods and ocean patterns such as the Atlantic Multidecadal Oscillation and the Pacific Decadal Oscillation,” a long-lived El Niño-like pattern of Pacific climate variability, study co-author Jamie Hannaford of the United Kingdom-based Centre for Ecology & Hydrology said in the release. “Our study shows that more research is needed to fully understand these connections.”

To be informative about climate-driven flood trends, watersheds that were subject to confounding human influences on flooding, such as urbanization and reservoir regulation, were screened out of this study, USGS explained in the release. Watersheds used in this study varied in size and other characteristics and were chosen to provide the most reliable and pertinent data. “The study has produced the most comprehensive international dataset of minimally altered watersheds yet assembled and is notable for the coverage of 13 countries across two continents,” USGS reported.