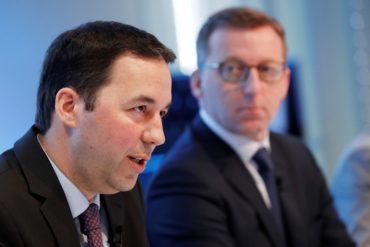 Swiss Re said that its net income in P&C Re was US$2.1 billion last year compared to US$3 billion in 2015, despite higher large losses from natural catastrophes, including the Fort McMurray wildfire, the earthquake in New Zealand and Hurricane Matthew. Premiums earned and fee income for the Group rose 10.0% to US$33.2 billion (vs US$30.2 billion in 2015). The Group’s combined ratio in 2016 was 94.8% from 87% in 2015.

“The result reflected solid underwriting results despite challenging market conditions, a higher large loss burden compared to last year, and a lower contribution from positive prior-year development,” the reinsurer said in a statement on Thursday.

P&C Re reported a combined ratio of 93.5% for 2016 compared to 85.7% for full-year 2015, after a higher burden from large losses, a lower contribution from positive prior-year development and the continued price softening of the market. P&C Re net premiums earned increased 12.7% to US$17 billion for 2016 from US$15.1 billion in 2015; the increase was driven by large and tailored transactions in the United States and Europe.

Life & Health Reinsurance reported a net income of US$807 million, a decline from US$968 million in 2015, mainly due to lower performance in the United Kingdom L&H portfolio, Swiss Re said in the statement. Premiums earned and fee income for 2016 increased by 8.6% to US$11.5 billion from US$10.6 billion, mainly from transactions in the Americas, successful renewals and new business deals in Asia.

For the Corporate Solutions segment, net income in 2016 was US$135 million compared to US$357 million in 2015. The 2016 result was impacted by continued pricing pressures and large man-made losses, mainly in North America, offset by lower-than-expected natural catastrophe losses, income from investment activities and realized gains from insurance in derivative form. Net premiums earned increased by 3.7% to US$3.5 billion in 2016, driven by the IHC Risk Solutions, LLC acquisition completed in the first quarter of 2016, Swiss Re said. The combined ratio increased to 101.1% in 2016 from 93.2% in 2015.

The Life Capital segment reported net income of US$638 million in 2016, compared to US$424 million in 2015. The increase was driven by a strong investment performance, mainly from the Guardian portfolio and solid underlying business performance, Swiss Re reported. Premiums earned and fee income in 2016 rose 5.7% to US$1.2 billion (vs US$1.1 billion).

“We report a good net income for 2016, despite navigating a difficult environment for quite some time now,” said Swiss Re Group chief executive officer Christian Mumenthaler in the statement. “Amid softening market conditions, we saw minimal global economic growth and continued low interest rates last year, on top of significant political developments.”

Net income in L&H Re was US$172 million (vs US$187 million in Q4 2015). Net premiums earned rose to US$3 billion, driven by growth in the Americas and new business growth in Asia.

Corporate Solutions reported a US$15 million net loss for the fourth quarter (vs a net income of US$20 million in Q4 2015) due to continued pricing pressure and large man-made losses, the reinsurer said in the statement. Fourth quarter 2016 net premiums earned increased by 5.9% to US$909 million. The combined ratio was 105.9%, up from 99% in Q4 2015.

Life Capital reported a net loss of US$88 million compared to a net income of US$151 million in Q4 2015 due to unfavourable movements on the Guardian investment portfolio driven by rising interest rates in the fourth quarter. Premiums earned and fee income was US$295 million in Q4 2016 vs US$304 million in Q4 2015.

“We were reminded in the fourth quarter that large losses do occur, but paying claims and helping to make the world more resilient is what we’re here for,” said Group chief financial officer David Cole in the release. “In addition, we have the strength and skills to continue to focus on our agile capital allocation and stick to our capital management priorities.”

Added Mumenthaler: “The environment was more challenging in 2016 than in past years, but we achieved and exceeded the Group performance target we set ourselves.”