Swiss Re Ltd. reported Friday its combined ratio in property and casualty reinsurance deteriorated 8.1 points, from 92.9% in the second quarter of 2015 to 101% in the three months ending June 30, due in part to losses from wildfires in Northern Alberta and earthquakes in Japan. 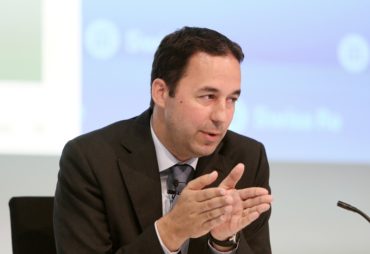 “The first two quarters of 2016 were mainly impacted by the wildfires in Canada and the earthquakes in Japan that occurred in the second quarter, as well as rate reductions and overall lower reserves releases than in the first half of 2015,” Swiss Re reported.

In Alberta, a wildfire that started in early May resulted in the evacuation of about 80,000. Estimated by Catastrophe Indices and Quantification Inc. to have caused Cdn$3.58 billion in insured damage, the wildfire was “by far the largest insured natural catastrophe in Canadian history,” Insurance Bureau of Canada vice president western and Pacific Bill Adams said July 6. 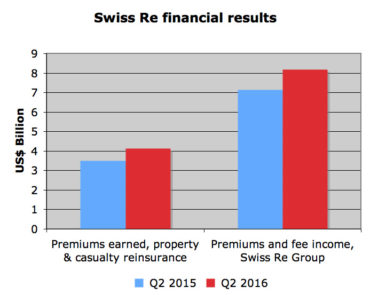 “Together with the losses from the earthquakes in Japan and the floods in Europe, overall large natural catastrophe losses added up” to about US$350 million, Mumenthaler added.

“The increase was driven by large and tailored transactions in the U.S and Europe, partially offset by unfavourable foreign exchange movements,” Swiss Re said of the year-over-year increase in P&C reinsurance premiums. 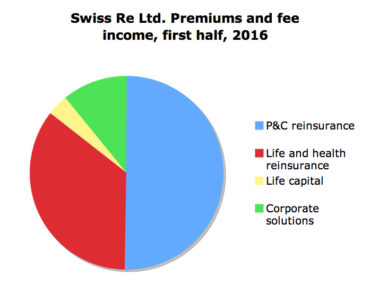 Swiss Re also reported July 29 treaty premium volume for July treaty renewals “increased by 10%, while the year-to-date volume has increased by 18%, driven by large and tailored transactions.”

In a press release, Swiss Re added: “The price environment for property and casualty reinsurance continued to be challenging, with continued price erosion in property. Therefore, Swiss Re has reduced natural catastrophe capacity in specific segments, including U.S. hurricane. Even though abundant capital continues to pressure rates, it does so to a much lesser extent than previously.”

Swiss Re also announced Friday its board proposes to elect a new member, Jacques de Vaucleroy, at its next annual general meeting, April 21, 2017. De Vaucleroy was AXA Group’s chief executive officer for the Northern, Central and Eastern Europe region of AXA Group (France) until June 2016. A Belgian citizen with a masters degree in business law, de Vaucleroy worked for 24 years at ING before AXA in 2010.