The claims impact of the B.C. wildfires

“There’s just a lot of increases on the ALE [claims],” Shane Swinson, senior vice president, insurance portfolio at First Onsite Property Restoration, said in an interview. “That seems to be the biggest impact that we’re seeing right now from a claims perspective.”

Most home, condo, and tenant insurance policies cover the cost of alternate accommodations and living expenses for those prohibited from returning home due to evacuation orders, for example. ALE covers anything over and above “normal expenses,” such as costs for hotel accommodations, certain food expenses, or using a laundromat.

As of Wednesday, more than 270 fires were considered active across B.C., with two dozen sparked since the beginning of the week, The Canadian Press reported. There are more than 60 evacuation orders across the province affecting nearly 4,300 properties, while residents of roughly 21,000 other properties have been warned to be ready to leave on short notice. The provincial government has also extended its wildfire state of emergency until Aug. 18, saying the order allows it to manage potential mass evacuations more quickly and give better support to residents affected by evacuation orders, CP reported.

Swinson said while they are seeing “typical damage” from the wildfires, the real area of concern is smoke and poor air quality. 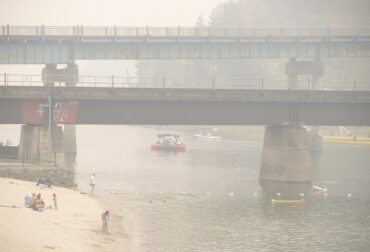 Wildfire smoke fills the air and obstructs the view of the mountains as people continue to take part in outdoor activities even though the air is currently 18 times above WHO exposure recommendation, in Sicamous B.C., on Thursday July 29, 2021. THE CANADIAN PRESS/Jason Franson

And B.C. is not the only affected province. Alberta, Saskatchewan, Manitoba and northwestern Ontario are also seeing the effects of the wildfires. “It’s not just affected the immediate area where the wildfires are, it’s carried thousands of kilometres east,” Swinson said. From a restoration standpoint, severe weather conditions coast-to-coast are “obviously depleting a lot of the resources, and that is making a more significant impact when you have multiple ones occurring at the same time,” he said.

Michael Young, a wildfire expert and vice president of model product development at Risk Management Solutions Inc. (RMS), said last week that recent “historic and dangerous heatwave” warnings from officials for northwestern U.S. and western Canada led to the formation of a “heat dome.” It stretched from Oregon to southern Alaska and moved slowly east across the northwest of the U.S. and western Canada.

The heat dome — sweltering heat (as if trapped in a bubble), caused by strong, high-pressure atmospheric conditions that push very warm air downward — led to new record high temperatures across the region. For example, Lytton, B.C. set the all-time Canadian heat record for three days in a row in June, culminating in a high of 49.6 degrees Celsius.

Lytton also saw a wildfire on June 30 that burned down about 90% of the village. Initial estimates from Catastrophe Indices and Quantification Inc. (CatIQ) are that the Lytton wildfire caused $78 million in insured damage, Insurance Bureau of Canada said in a release Wednesday. There were roughly 300 claims, the majority of which were related to residential properties.

It’s important for businesses and homeowners to know their insurance policy and coverages, and have a relationship with their broker, Swinson added. “The broker plays a significant role in making sure that you’re getting the coverage that you need… and you partner with the right insurance company that’s suitable for your needs.”

Policyholders need to educate themselves and do their due diligence, Swinson said. For example, if you’re doing renovations, make sure you’re using fire-safe materials.

Feature image: The remains of the village grocery store is seen in Lytton, B.C., on Friday, July 9, 2021, after a wildfire destroyed most of the village on June 30. THE CANADIAN PRESS/Darryl Dyck