There’s a chance COVID-19 could claim a Canadian insurer, one property and casualty insurance expert believes.

“Canada has been blessed for a sustained period with no insurer failings — but there will be one,” warned Alister Campbell, president and CEO of the Canadian Property and Casualty Insurance Compensation Corporation (PACICC).

Campbell was speaking as a panellist last week on Canadian Underwriter’s webinar entitled COVID-19 and the Economy: The Impact of a Recession on the Canadian P&C Industry. He was answering a question about the future of the industry’s overall financial position as a result of the economic recession linked to the current pandemic.

“The next one,” he added, referring to a hypothetical insolvency, “I think we have assumed would be triggered by some form of Nat Cat event where unanticipated extreme events overwhelm some underwriters’ understanding of what they thought they had for exposure, [and] how much reinsurance they needed under those circumstances.”

But at a time when the novel coronavirus has thrust the global economy in a recession, “a crisis like this is the kind of event that can unsettle an insurer,” Campbell said.

However, both Campbell and fellow panellist Saad Mered, CEO and chief agent of Zurich Canada, agreed that they’re not too concerned about the health of Canada’s largest P&C insurers.

“For a top 10 carrier in Canada to wobble, I think, would be extraordinary, given what we know today,” Mered said. “They’re either part of a big multinational group or they’re domestic champions with highly diversified — albeit domestic, but diversified — across customer segments and lines of business. I think that would be remote.” 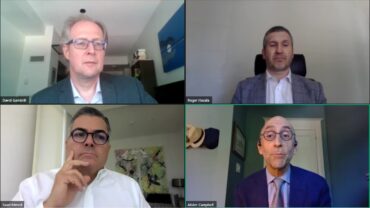 Being a Top 10 company comes with diversification and less risk, Campbell said. “There’s no particular reason to think of [a national insurer] is actually being riskier than one concentrated in a single region — probably the opposite.”

Still, Campbell couldn’t entirely rule out the possibility. “It would be an impressive accomplishment for one of our Top 10 to get in that much trouble,” he said. “Is it possible? Yes.”

But is it likely? If this were another part of the world, there may be much more concern, Mered observed. “It’s a well-run sector [in Canada] for a number of reasons and that’s why I’m not as pessimistic as some of my colleagues might be in other regions of the world. It’s good to be in Canada.”

The sustainability of insurers is of natural importance to brokers, noted panellist Roger Hacala, national practice leader of BFL Canada Risk & Insurance Services. When placing coverage, brokers need to know that the insurer will be able to pay claims.

“Because we’ve got the accountability to our clients when the rubber hits the road, [brokers have to be] able to make sure claims are going to be paid, and that the company’s got the [capital] sustainability to be able to do that and continue on going forward,” Hacala said.

Campbell said brokers should pay attention to the evolving business strategies of companies, while “paying obvious attention to the ones who seem to be acting in a fashion that would indicate they’re struggling. And the financials will always lag the behaviour.”

Overall, the economic situation makes the broker even more important to their clients, Campbell emphasized. “It’s a good time to be a great broker, would be one way to think about it,” he said.