The one technology the industry can’t wait to see grow 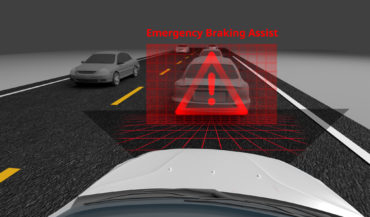 There’s one automotive technology that has industry experts excited because it’s playing an increasingly key role in reducing crashes and increasing driver safety: autonomous emergency braking (AEB). But it will take some time before significant results are seen.

AEB is part of a greater tool referred to as ADAS, or advanced driver assistance systems. And it’s the most important component, advocates said.

“It’s certainly the greatest leap forward in the ADAS technologies,” said Andrew Shepherd, Ottawa-based director of industry programs with the Automotive Industries Association of Canada, a national group representing the automotive aftermarket in both mechanical and collision repair.

“The one feature that we love is autonomous breaking because if you are distracted, the car is going to stop itself. To me, we need more of that,” Phil Gibson, managing director of personal insurance at Aviva Canada. “We want people to be safe. We don’t want people to get in accidents — not from the business standpoint, just from a human standpoint.”

Shepherd agreed. “The core thought, of course, is that the safety of the driver is paramount,” he said. “For safety, it saves so much money and time and lives that there’s no way around it.”

A recent Insurance Institute for Highway Safety study found that that automatic braking could reduce front-to-rear crashes by more than half.

The problem is, it’s not common enough yet to make enough of an impactful change, said a collision indsutry expert who didn’t want to be named. Furthermore, it’s not to be solely relied upon as a silver bullet.

“The assistance systems are designed with the importance of the human partnership,” he added. “The technology exists so that cars will stop themselves, but the driver needs to understand they’re expected to maintain full responsibility of being the driver.”

Gibson is looking forward to Sept. 1, 2022. That’s when automakers are to have AEB on all new passenger vehicles so whether it’s distracted driving or a surprise on the road, it allows “you to react faster and we don’t see that accident,” he said.

The next – and biggest – checkpoint to see impactful change will be when most vehicles on roads have AEB so that systems in different cars are working to prevent collisions.

“When a certain percentage of the vehicles on the street have this technology — when the two cars are together preventing a crash — then that’s a real tipping point. But that’s a decade or two into the future,” Shepherd said.

It’s especially helping reduce the number of distracted driving incidents which typically occur at low speed, which is where the growth in crashes are being seen.

“When texting became a problem, we saw a lot of those, ‘I just rolled into the guy in front of me.’ Because of that braking system, now we don’t see that as much,” the collision expert said. “But does this make people more confident to be distracted? That’s another question that has to be asked to the industry: Because the vehicle is getting so much safer, do we have false confidence?”

Still, while other features have been recently added to vehicles to keep passengers safe, like crushable metals to protect passengers, “in terms of total accidents and damage there’s no doubt that it’s autonomous braking. I would say this is on the edge of a revolution rather than an evolution,” Shepherd said.