The other financial hit your commercial client takes after a flood

FM Global is raising concerns about companies that don’t practice flood mitigation on their properties, warning that flooding perils decrease an organization’s value by 5% a year after the event.

Investors will have their confidence shaken regarding the company’s decision-making at the highest level, the commercial property insurer adds. And rather than focusing on the damage caused by the flood, invsestors will lower their expectations of future cashflow.

The insurer commissioned the survey to study 71 of the world’s largest publicly-traded companies, all of which reported financial damage in recent years from a major flood event. It found that 12 months after flood losses, shareholder value dropped by an average of 5%, totalling a collective US$82 billion.

That’s a pretty big loss when compared to the cost of flood mitigation, Pretty said. “Investors evaluate the disruption caused by flood and anticipate the long-term harm to corporate reputation, market share and growth ambitions. They reassessed the future of these disrupted companies and it was 5% worse. That would seem to dwarf the cost of investing in flood protection.” 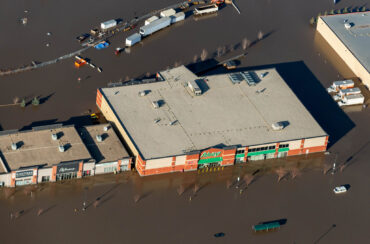 Historically, re-insurers and banks bore the brunt of value destruction from natural disasters, says the report, The Value Impact of Flood Events. Re-insurers paid for the losses while banks saw the deterioration of their loan portfolios and their lending capacity compromised, which led to both sectors seeing their share prices drop.

Pentland modelled the share prices of companies that disclosed direct financial damage from one or more named flooding events across the year following the relevant event. The 5% average drop in share price was clear.

“The evidence presented shows that the stock market is now recognising the cost of disruption to non-financial corporations,” the report said.

“Given that share prices are forward-looking, the US$82 billion in lost shareholder value represents not the physical damage, nor even the immediate loss in profits, but the long-term impact of disruption to the business,” the report added. “This includes, for example, the reputational loss from missing targets, the growth opportunities that are gone forever, and a strategic plan that is now awry. Investors have reassessed the future and it is 5% worse.”