A captive insurance solution is designed for long-term risks, so a client looking to set something up for short-term risks may end up regretting that decision, experts warned during a recent Canadian Underwriter webinar.

When a company sets up a captive, it is essentially self-insuring its own risk, explained Patrick Ferguson, captive sales executive and senior vice president at Marsh’s Captives Solutions Group. In other words, the captive is taking on additional risk as part of the organization. So, considering that the company’s captive will initially be trying to build up a capital base, it’s often advisable not to enter short-tail lines that may see claims payments right away.

“A lot of times, what we say to clients [establishing a captive] is, ‘Look at longtail risks to begin with. Think worker’s comp [and] liability.’ Why? Because the tail tends to be longer, which means that the payout patterns of claims don’t necessarily happen right away — they can happen over three, five years or longer,” he said during the webinar, Captivating Business: How Captives Can Work for You in the Hard Market hosted by Canadian Underwriter.

“That just allows you to build up a bit of a surplus or funding for your captive prior to having to pay large claims,” he continued. “And that’s not to say we don’t seek captives for short-tail business, such as property. It’s just that when you’re looking at a short tail line of business, you have to be very careful that you’re capitalizing for that.”

In a worst-case hypothetical scenario, picture a client establishing a captive to handle property claims. Commercial property claims tend to happen more frequently and in a shorter timespan, Ferguson observed. So, if a client suffers a fire quickly after the captive is established, the captive may not have been sufficiently capitalized to cover the claims cost.

“All of a sudden, you’ve got a large loss and your captive is going to be on the hook for that significant claim,” Ferguson said. 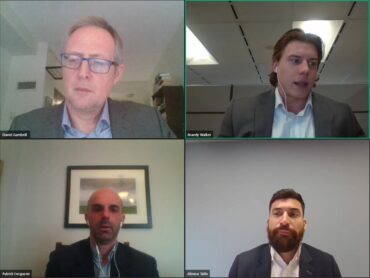 This is especially risky for a client that might be using a fronting insurer for their captive, warned Alonso Tello, vice president of captives and alternative risk at AXA XL Canada. It’s important that clients are asked what types of limits they’re taking, especially when they’re just getting started and don’t have much capital compared to the risk they’re taking on.

“That creates a credit risk to us,” Tello said, representing the perspective of an insurer fronting the funds to a captive. “If we see a client really jumping into the deep end and taking very large limits, that’s going to be reflected in the terms and conditions we have in a reinsurance agreement to make sure that there’s someone there to pay us back if we ever have to pay on behalf of the clients in the event of an adverse loss scenario.”

Braedy Walker, assistant vice president of captives and analytics at HUB International Canada, agreed. But he didn’t shut the door entirely on the possibility of adding short-term risks to the captive once it has been built up and has shown to be successful for the client. “And then, maybe look at looping a property or another short tail type of risk after two or three years, once there’s capital,” he suggested.

Also, Walker noted, it’s ideal to judge lines based on frequency as opposed to severity. “It makes the prediction of losses a lot more accurate from our standpoint.”

Tello said a client’s risk portfolio “really runs the gamut,” but between 50% to 60% of AXA XL’s portfolio is made up of general liability, property and casualty lines. That type of diversification happens when a captive has been around for some time, he said.

“If you think about your business and the types of exposures you’re exposed to in your day-to-day, you can kind of think, ‘Okay, how can I better manage this and is a captive the right choice?’” Tello said. “So we see things through our aviation book, through our AXA Climate team that does parametric weather-related risks, and even employee benefits is another line that we see. But we tend to see those more in mature captives that want to diversify.”