The leaders of one of Atlantic Canada’s largest brokerages are finalists in EY Canada’s Entrepreneur Of The Year award program. 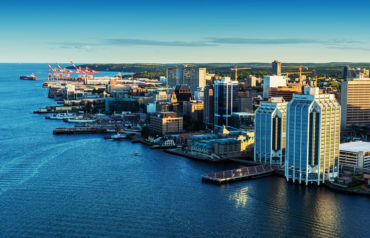 Gina McFetridge and Michael Stack, president and CEO respectively of Archway Insurance, are among the finalists announced July 18 by Ernst & Young. McFetridge is a past president and chairperson of the Insurance Brokers Association of Nova Scotia.

With 31 locations and about 200 staff, Amherst, N.S.-based Archway is much bigger now than it was before July 1. That is when Archway added seven offices by acquiring Shaw Insurance Agency Ltd., Solutions Assurances 360° Inc. and J. & N. Assurances Ltée. Archway acquired two additional brokerages earlier in 2019: Hall & Fairweather of Saint John, N.B., and George Mitchell Insurance of Liverpool, N.S.

McFetridge joined Archway in 2010. At the time, she was “very much in the trenches,” placing policies for clients and receiving payments.

“Now, the majority of my time is spent just looking after our employees, making sure that any obstacles to them getting their job done are removed, as well as helping build our brand, ensure consistent quality and workflows are developed for all our offices,” she said in an interview. And also “just communicating who we are, who are values are both internally and externally to the market.”

Entrepreneurs can be nominated to the EY program either by themselves or their peers, an EY spokesperson told Canadian Underwriter.

Winners in the Atlantic program will be announced this Oct. 17 at a gala in Halifax. EY also has an Entrepreneur of the Year award for the Pacific, Prairies, Ontario and Quebec regions.

Finalists in the Prairies program – announced July 16 – include Matt Alston and Lance Miller, co-founders of Surex Direct. Magreth, Alta.-based Surex places home, auto and commercial lines and says it can deliver 10 quotes online in 10 minutes or less. The Prairies winners will be announced Oct. 10 in Calgary.

Nominees are interviewed by an independent panel of judges. EY keeps the nomination packages confidential.

One selection criterion is innovation. “We are constantly looking to evaluate different types of technology and make sure that we are staying abreast and ahead of those in our brokerage to improve our efficiency and better serve our clients,” McFetridge said in an interview.

For example, Archway recently rolled out a chatbot called Archie. One of Archie’s tasks is to answer basic questions from website visitors such as where the nearest office is and when it is opening.

For the Atlantic awards, the judges will select one finalist in each of the seven categories. Then it will select an overall winner in each region.

Winners of the Pacific, Ontario and Quebec regions will be announced Oct. 3 in Vancouver,  Oct. 24 in Toronto and Nov. 7 in Montreal.